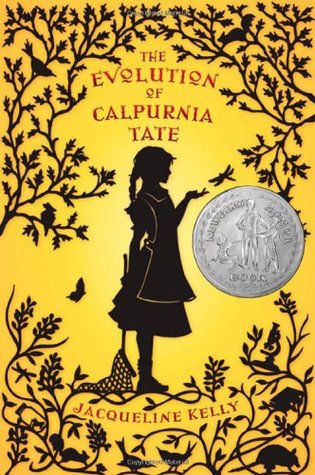 The Evolution of Calpurnia Tate by Jaqueline Kelly, a 2010 Newbery Honor Award winner, is the story of an eleven-year old girl at the turn of the twentieth century.  She is the only girl in a family of seven kids and is expected to act like one when all she wants to do is play outside with her brothers.  Her chores are around the house.  She must take piano lessons, knit, and cook.  Her expected life is one of a wife and mother.

Enter her grandfather, Captain Tate, who’s a war hero from the Civil War.  He started a cotton gin company, which Calpurnia’s father now runs so Captain Tate spends his days trying to distill liquor from pecans and exploring the scientific world around him.

Calpurnia’s brother, Harry, had given her a notebook to write down her scientific observations.  Confused on the color of grasshoppers, Calpurnia went to her grandfather for help.  Here blossomed over the summer of 1899 a relationship of mutual hobbies.  Calpurnia spent every possible moment with her grandfather, learning, observing, and assisting him in his endeavors all the while learning everything possible she could.  He gave her a copy of The Origin of Species and she plugged through that as well.  The most exciting event is when Calpurnia and her grandfather discover a new species of plant and send off to Washington DC to have it confirmed.

Calpurnia’s mother dislikes all the time she is spending with grandfather and begins to make her take more and more time to learn to sew and cook.  Calpurnia hates every minute of it but slowly begins to understand what her expected role in this world will be.  However, she dreams of going to university and becoming a scientist.

At Christmas that year, Calpurnia is given a book.  She is so excited until she reads the title:  The Science of Housewifery.  She is devastated and defeated.  She begins to wonder if her dream will always be a dream.

Finally, word comes of the plant:  it is confirmed!  It’s a new species and named after them!  Calpurnia realizes then how grandfather had been “the greatest gift of all” and she can do whatever she desires.  “There are so many things to learn, and so little time is given us.”

Instead of resolutions, Calpurnia makes a bucket list of things she wants to see before she dies, one of which is snow.  And guess what?  The next day it snows for the first time in decades in Texas.  “Anything was possible.”

Great read about defining who you are, believing in yourself, and following your dreams.

One thought on “The Evolution of Calpurnia Tate”