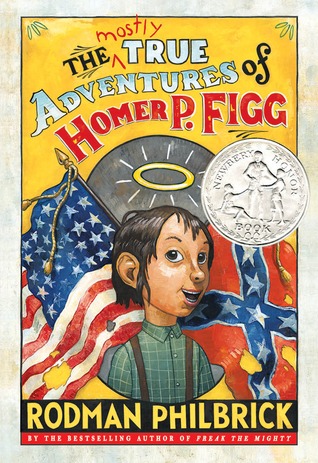 The Mostly True Adventures of Homer P. Figg by Rodman Philbrick is a delightful tale of a twelve-year old boy who is determined to find his brother who was illegally sold into the army during the American Civil War.  Orphans, Homer and his brother are being raised by their mean uncle, Squinton Leach.  Squint sells Harold and Homer sets out to find him.

“A person has only two options in life, to do something or to do nothing,” Homer is told.  For Homer, “Nothing is not an option.”

He runs into some slave catchers who try to use Homer in their schemes to collect runaway slaves and return them to their owners.  In this process he meets a nice, rich man named Jebediah Brewster, a Quaker, who puts Homer under the guardianship of a preacher and gives him money to find his brother.  On the train ride, the guardian, Mr. Willow, is duped by con artists and the money is stolen.  Homer finds himself thrown into a pig pen.

The pig pen leads to Homer being cast into a traveling medicine show who performs for troops.  They follow the army until the leader, Fenton Fleabottom, is caught as a Confederate spy.  Homer escapes by climbing into an air balloon, which lands in a nasty pond on the side of the Confederates.  Taken as prisoner, Homer is soon freed due to the Battle of Gettysburg.

Homer flees on a horse, through the raging battle, and finally meets up with his brother who has been labeled a deserter.  However, every man is needed in the battle so Harold gets his chance to fight.  Homer, so afraid Harold will die, tries to stop him.  He shoots a bullet at him to scare him but it rickochets into his leg.  Homer ends up being the flag bearer and then the Confederates surrender.  Both are adopted by Jebediah Brewster back in Maine and end up leading a happy life.

Newbery Honor Book for 2010, this book is full of fun and unbelievable twists and turns.  Homer likes to fudge the truth, which lands him in all of these precarious situations but also gets him out of them.  Great historical read that depicts the 1860’s turmoil perfectly.  Highly recommended for all ages!

4 thoughts on “The Mostly True Adventures of Homer P. Figg”