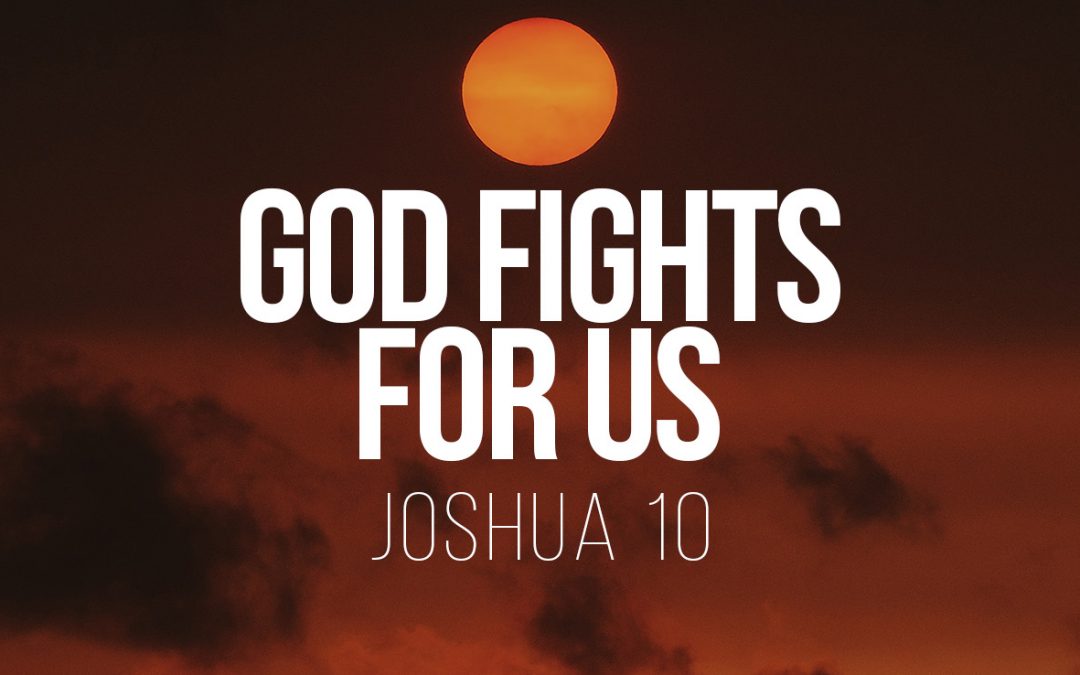 The King of Jerusalem, Adoni-Zedek, heard about the Israelites’ conquering of Ai and Jericho and the peace treaty it had made with Gibeon. He gathered together 4 more kings of the Amorites–Hebron, Jarmuth, Lachish, and Eglon– and attacked Gibeon, which was an important and large city.

The Gibeonites, now subjects of Israel, appealed to Joshua for help. He came up with his best fighting men from Gilgal. The Lord promised to deliver them into his hands. After marching all night, Joshua took the kings by surprise. The kings retreated and Joshua pursued them all the way to Azekah and Makkedah.

The Lord brought hail that killed many of the retreating army. Joshua asked for the sun to stand still and the moon to stop. God fulfilled Joshua’s prayer as a sign He was with Israel.

3) Joshua took his entire army, his best fighting men included, and marched overnight to surprise the kings of the Amorites. God told Joshua “Do not be afraid; I have given them into your hand. Not one of them will be able to withstand you.

4)  “The Lord threw them into [the Amorites] into confusion before Israel.” “The Lord hurled down large hailstorms down on them from the sky, killing more than swords.” God stopped the sun on the request of Joshua so the conquest would be complete. God is good. God keeps His promises. God wants His glory to be known. God fights for us. God has His ways and uses various methods to achieve His history.

5) Personal Question. My answer: If you pray, God is there, and He will guide and lead you. God will work miracles to help you if you have faith. Definition of integrity: the quality of being honest and having strong moral principles; moral uprightness; the state of being whole and undivided.

I love the second definition of integrity. When Israel is together, of one mind and united in a cause, they are unbeatable. They act as one unit and are much stronger and a more formidable opponent. Also, the Israelites defend the Gibeonites because they do have a treaty. They are honoring their commitment to others.

I love how the Lord doesn’t hold anything against Joshua; he is totally forgiven for his mistakes. We just saw Joshua disobey an order from God: don’t make treaties with the Canaanites. Now, when Joshua is called upon by the Gibeonites to help, he honors his word and God honors Joshua’s word as well as Joshua seeks the Lord here.

If God can let go of the past so easily, why can’t we?

Why the Military Coalition of the Southern Kings?

The Israelites had brought the unique judgment of God against the Canaanites (Jericho and Ai) and did not take any plunder or profit from the cities. An Israelite army fighting for the glory of God and as a unique instrument of God’s judgment made everyone shake in their boots.

The previous victories across the middle of Canaan effectively separated Canaan between north and south. “Israel controlled the Benjaminite plateau, the crossroads between the hill country and the Judean wilderness. It provided access to the coastal plain and lowlands to the west via the Beth Horon pass.” (Hess)

“It has been conjectured that the Canaanitish kings assumed this name in imitation of that of the ancient patriarchal king of this city, Melchizedek, whose name signifies king of righteousness, or my righteous king: a supposition that is not improbable.” (Clarke)

Remember the Gibeonites surrendered because they honored the God of Israel, not because they couldn’t defend themselves.

The Southern Kings gathered forces much as Satan does today. The enemy will use all he has against us.

It was only the Southern kings because the northern kings were already occupied by Israel.  “Jerusalem’s leader wrote at least five letters to the Pharaoh regarding his town and its security. These letters, part of the collection known as the Armana letters, are longer and more literate than the contemporary missives of other Palestinian town leaders.” (Hess)

Jerusalem, Jarmuth, Lachish, Eglon, and Hebron were important cities either for their location or for the trade routes associated with them.

Afraid to attack Israel directly, the kings attacked the Israelites’ subjects, the Gibeonites.

Why are the Israelites still at Gilgal?

What Lessons do we Learn from the Gibeonites?

Allowing these Canaanite kings to wipe out the Gibeonites would have been a convenient way to get out of a vow that should not have been made, but they will have none of it.

We should have the same sense of honor. Though Joshua was only bound to not kill the Gibeonites himself (Joshua 9:15), he also felt obliged to fulfill the spirit of the vow he made to the Gibeonites.

Why were the Southern Kings taken by Surprise?

The Southern Kings didn’t believe the march was possible in that short of a time. The march from Gilgal to Gibeon involved a climb of 3,300 feet (1,000 meters) over a distance of about 20 miles (32 kilometers). This was eight to ten hours of hard marching all through the night.

God does His work, but He draws us into working with Him. Often God waits to see our initiative, our willingness to be a partner with Him before He does what only He can do.

This is not the idea that “God helps those who help themselves.” The idea is “God wants to draw His people into partnership with Him in seeing His work done.”

What Did the Hailstorm Signify?

Why Did Joshua Ask for the Sun to Stand Still?

How did the Sun Stand Still?

Beyond the reason, “Because God said so,” here are various scientific ideas:

In Worlds in Collision, Immanuel Velikovsky suggested that the long day was caused by the near pass of a comet, that was powerful enough to tilt the axis of the earth. “The tilting of the axis could produce the visual effect of a retrogressing or arrested sun; a greater tilting, a multiple day or night.” [385] He also noted that there are records among the ancient Americans that speak of an extraordinarily long night in the same approximate time.

Fun Battle Fact of the Bible:

This is the first time in Joshua of a counterattack – the enemy initiating a battle against Israel. “Here for the first time Israel does not initiate the aggression but responds to an ally’s appeal.” (Hess)

What Does Joshua 10 Teach Us?