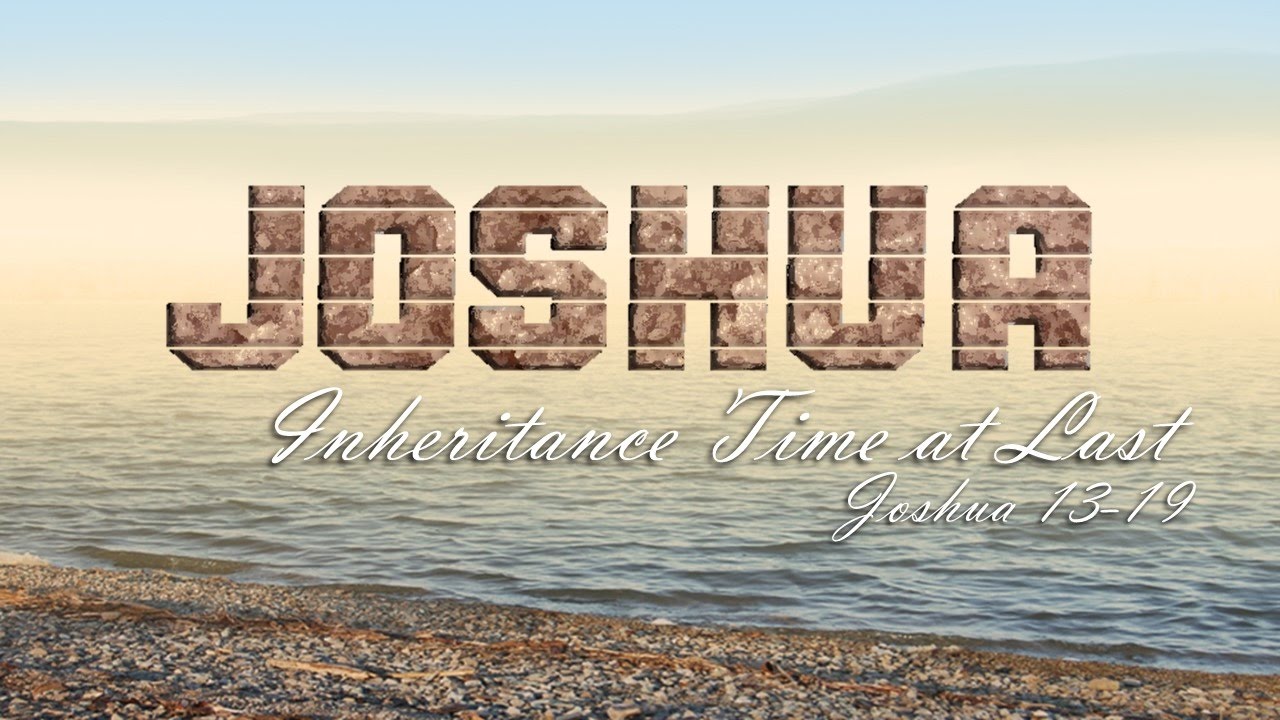 WHAT’S AHEAD: This is the dividing point in the book of Joshua.

The rest of Joshua tells about what happened 5-7 years after the crossing of the Jordan River. Chapters 13-22 give a kind of land-title record for the nation. Genesis 48-49 and Deuteronomy 33 provide background material. For example, Reuben’s tribe forfeited the right to first choice because of sexual sin, and Simeon and Levi lost their rights because of their violent past.

God tells Joshua there is still much land to be taken, and that He’ll drive out the Sidonians. The land east of the Jordan River is divided up amongst all the tribes except the Levites who were set aside as priests of the nation.

Caleb approaches Joshua and demands what God had promised him for his work 40 years prior as a spy who wholeheartedly followed God’s orders. At age 85, Joshua blessed Caleb and gave him Hebron as his inheritance. The land had rest from war.

3) All kept their word/promises. God rewarded Caleb with land for faithfulness (as most leaders do). The Israelites did not argue, but settled their portion of the land without question, nor were they greedy.

4) Personal Question. My answer: Caleb is rewarded for not following others and obeying God instead. He had faith the Israelites could take the land, and he had no fear as he encouraged the Israelites to do so. In the end, the bad report won out and God cursed His people because of it, dooming them to die in the desert–all except Joshua and Caleb. Caleb was promised land by Moses as his reward, and he asks for it. This inspires me to buck the trend and follow Jesus and be bold and ask for things from God.

5) Personal Question. My answer: He has always provided no matter what and always led us to the next step in His  journey for us. My whole family is flourishing and for that I am extremely grateful.

I love the cooperation amongst the Israelites because what could have been a very ugly situation with the allotment of land was peaceful and faithful. I love Caleb’s reward–not only with seeing the Promised Land but with gaining a portion of it for himself. The whole process is very organized–impressive for such a monumental task.

[Note on “Skim”]: I believe this is the first time ever I have seen BSF tell us to “skim” a passage of the Bible. I don’t believe God wants us to just “skim” His word ever. If it’s in the Bible, it’s important, it’s there for a reason, and it’s for us from God. Please don’t “skim” anything. You may miss that one phrase that is exactly what God wants you to hear. Save skimming for the news.

Age does not define you. Even though Joshua is old, God still has work for him to do.

God gave all the tribes the land, yet they still had to take it. We are to walk in God’s promises, not lie down and rest.

Only two small tribes of peoples were not replaced by the Jewish tribes settling on the east side of the Jordan: the Geshurites and the Maachathites.

The Maachathites may have come from the Maachah mentioned in Genesis 22:24 who was a nephew of Abraham. Later, when Sheba rebelled against David and he fled, David may have taken refuge in one of the cities of the Maachathites (2 Samuel 20:14-15).

The Levites as priests would survive off of what the other tribes gave them for administering to the spiritual duties of the nation; they had no need of land to grow food. In fact, their inheritance was the greatest of them all since they were closest to God.

Be happy with where God has placed you. He is our inheritance. Your lot in life is nothing in comparison.

Math Challenge: Just How Long Did the Capture of Canaan Take?

We can deduce this from what’s recorded in the Bible. Caleb was 40 when Moses first sent him to explore the land. Israel spent 38 years in the desert (Deuteronomy 2:14), making Caleb 78 at the beginning of the invasion. Caleb tells us here he is now 85, so for the last 7 years, the Israelites were fighting. Him and Joshua were the only old people still left.

Caleb was one of the only two spies to come back with a good report, a report of faith, believing that God had given Israel the land and would enable them to conquer it (Numbers 13:26-14:9). The other ten spies believed that Israel would be destroyed in the attempt to take Canaan, and Israel believed the ten doubting spies.

This was the cause of Israel’s forty years of wandering in the wilderness; God would not allow that generation of unbelief to enter in, so He waited for them to die in the desert (Numbers 14:26-38). The only ones of age at the time of the rejection who actually entered the Promised Land were Joshua and Caleb, the two faithful spies.

Caleb asks for the land of the Anakim (the giants). He knows these enemies of God must be faced and defeated and he has the faith to do it. He did not pick the easy way out as he easily could have. The work is his, and he boldly claims it.

God rewards the wholly giving yourself over to Him.