Hannah praises God in her prayer as she leaves her son, Samuel. She boasts of God’s strength, His holiness, His omniscience, of how God feeds and raises up, He humbles and exalts, He silences the wicked, and God’s people prevail.

6) Personal Question. My answer: God is faithful. His will prevails. He is in charge of who wins and loses and who He exalts or humbles. He is our Rock. I’m encouraged to stay faithful.

7) Part personal Question. My answer: Abraham was willing to sacrifice Isaac. God sacrificed Jesus. I’ll sacrifice whatever He tells me.

8 ) God will defeat those who come against Him. He will silence the wicked. He will give strength to the coming Kings of Israel. He is sending Jesus (the King and the Anointed) to conquer all. This is the time before the kings, so she must be speaking of Jesus here.

Great prayer example for us all. Praising God. Listing His character and power. Thanking Him.

1 Samuel 1:28 ended, “So they worshipped the LORD there”. This song records the worship Hannah offered on the very day she left her little boy – her only child – at the tabernacle.

Hannah showed a depth of commitment and love for God that may humble us. On the day she made the biggest sacrifice of her life she rejoices in the LORD.

She could not rejoice in leaving her son. In the most desperate situations, when we have nothing else to rejoice in, we can rejoice in the LORD.

The horn is used often as a picture of strength in the Bible (Psalms 75:4-5 and 92:10). This is because the strength of an ox or a steer could be expressed in its horn. Hannah spoke of strength and power being exalted in the LORD.

What does the horn in the Bible signify?

Hannah had a strong sense of vindication over her rival, Elkanah’s other wife named Peninnah. Peninnah cruelly brought Hannah low (1 Samuel 1:6-7), but now Hannah rejoiced because the LORD lifted her up. 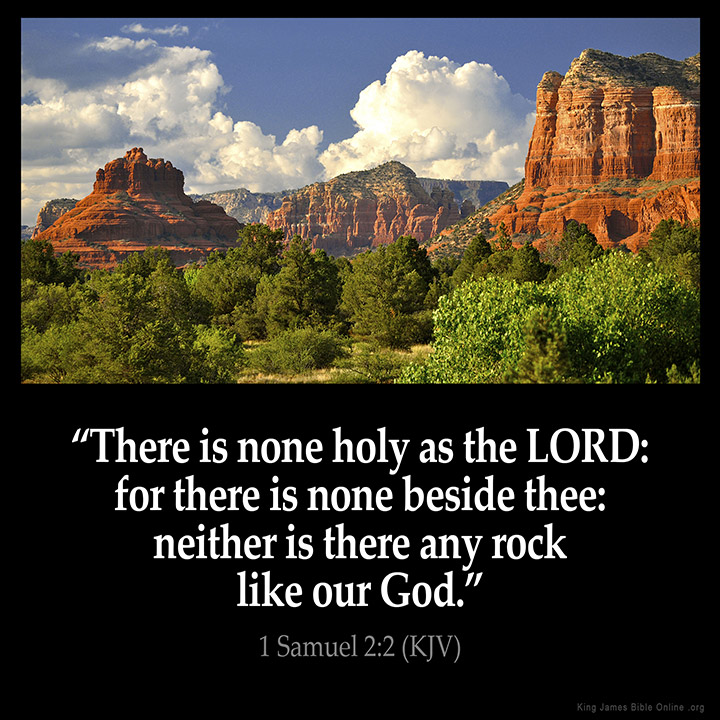 Hebrew poetry does not rhyme words by sound as much as it rhymes ideas. The ideas of the three lines of 1 Samuel 2:2 all rhyme together, having different words yet “sounding” the same.

Hannah had her rival in mind when she said not to talk so proudly. Pride can be expressed in many ways, but it usually is expressed by our words.

God humbles the strong, which He can change very quickly.

Hannah knew she was barren because the LORD had closed her womb (1 Samuel 1:6). She knew God first set her low, and then brought her high. She could see the hand of the LORD in it all.

God is in control of the foundations of the earth.

God uses His power to set things right. It isn’t enough for us to believe God has this power. We must know He will use it for His glory and righteousness.

Who is “the king” and “the anointed”?

Hannah speaks of Jesus as the king and anointed one.

Fun Fact: This is the first place in the Bible where Jesus is referred to as the Messiah.

It’s MESSIAH in Hebrew, CHRIST in Greek, and ANOINTED in English.

Zecharias, the father of John the Baptist, quoted Hannah in Luke 1:69 when he prophetically called Jesus a horn of salvation, quoting from 1 Samuel 2:10. Mary the mother of Jesus quoted Hannah’s song often (Luke 1:46-55).

Young as he was, Samuel had a ministry to the LORD. Our young people can praise, serve, and please God too.

The Living Bible translates it well: And the child became the Lord’s helper.