God first speaks to Samuel late at night as he lay in the temple. Samuel thought it was Eli calling him but by the third time, Eli realized it was God calling Samuel. He tells Samuel to ask the Lord to speak. The Lord tells Samuel He will carry out the consequences against Eli and his sons. Eli does not punish Samuel for these words. Samuel continues to grow and prosper, and he was recognized all over Israel as a prophet of the Lord.

12) God repeatedly calls Samuel until he figures it out. He does this for us as well. God calls Samuel when he’s tired and in His temple. God calls us too when we least expect it. God reveals. Samuel is honest with Eli, but he’s afraid of him as well. Eli is gentle with Samuel.

13) It’s a huge privilege and responsibility as the Lord’s servant. If you abide sin, you suffer severe consequences. If you’re obedient as Samuel is, you are blessed by God’s presence and voice. As Christians saved by Jesus, we all have a huge privilege and responsibility as God’s people. It’s not quite as big as a priestly role, but it’s one we need to take seriously.

I love how God uses children. Children are often dismissed by adults as not knowing anything. Samuel proves God cares for them just as much as adults. I can just imagine how cute Samuel must have been, running to Eli and saying, “Here I am!” If only we could do the same thing when God calls.

We see for the third time Samuel ministered to the LORD (also in 1 Samuel 2:11 and 2:18) just as Aaron and his sons did at their consecration as priests (Exodus 29:1) and just like Paul and Barnabas did before they were sent out as missionaries (Acts 13:1-2).

The only word of the LORD we read of in the first two chapters of 1 Samuel is the word of judgment brought by the man of God against Eli. God didn’t speak often, and when He did, it was a word of judgment.

Why did God stop speaking to His people?

God will speak, and guide, when His people seek Him, and when His ministers seek to serve Him diligently.

Eli was spiritually and physically blind. His age made him an ineffective leader for Israel.

What’s the lamp of God?

We don’t know for certain how old Samuel was. Some scholars believe God spoke to Samuel in an audible voice, instead of in an “inner voice,” though this is not certain. But Samuel was so impressed by what he heard, he responded by saying, “Here I am!”

Who in the Bible responds with, “Here I am!”

Samuel was an obedient boy who showed concern for Eli by running to him. Eli was blind and might need help.

What do we learn from the repeated calls from God?

When speaking to us, God almost always confirms His word again and again. It is generally wrong to do something dramatic in response to a single “inner voice” from the LORD. If God speaks He will confirm, and often in a variety of ways.

Samuel was a godly and obedient boy, serving God wonderfully. Yet, he had not yet given his heart to the LORD. Even children raised in a godly home must be converted by the Spirit of God.

What do we learn from Eli’s directives to Samuel?

Some scholars believe since the Lord came and stood this could be an appearance of the LORD, perhaps in the person of Jesus before Bethlehem. This was not a dream or a state of altered consciousness.

Through the word of the man of God in 1 Samuel 2:27-36, Eli already heard of the judgment to come. This word to young Samuel was a word to confirm the previous message from God.

Probably, the judgment declared by the man of God in 1 Samuel 2:27-36 was a warning, inviting repentance. Because there was no repentance God confirmed the word of judgment through Samuel. Or perhaps Eli pleaded that God might withhold His judgment, and this is God’s answer to that pleading.

Of course, Samuel didn’t sleep at all. We see young Samuel laying on his bed, ears tingling at the message from God, wondering how he could ever tell Eli such a powerful word of judgment (Samuel was afraid to tell Eli).

It was hard to tell God’s judgment, but it is our responsibility to do so.

What does “Let none of his words fall to the ground” mean?” 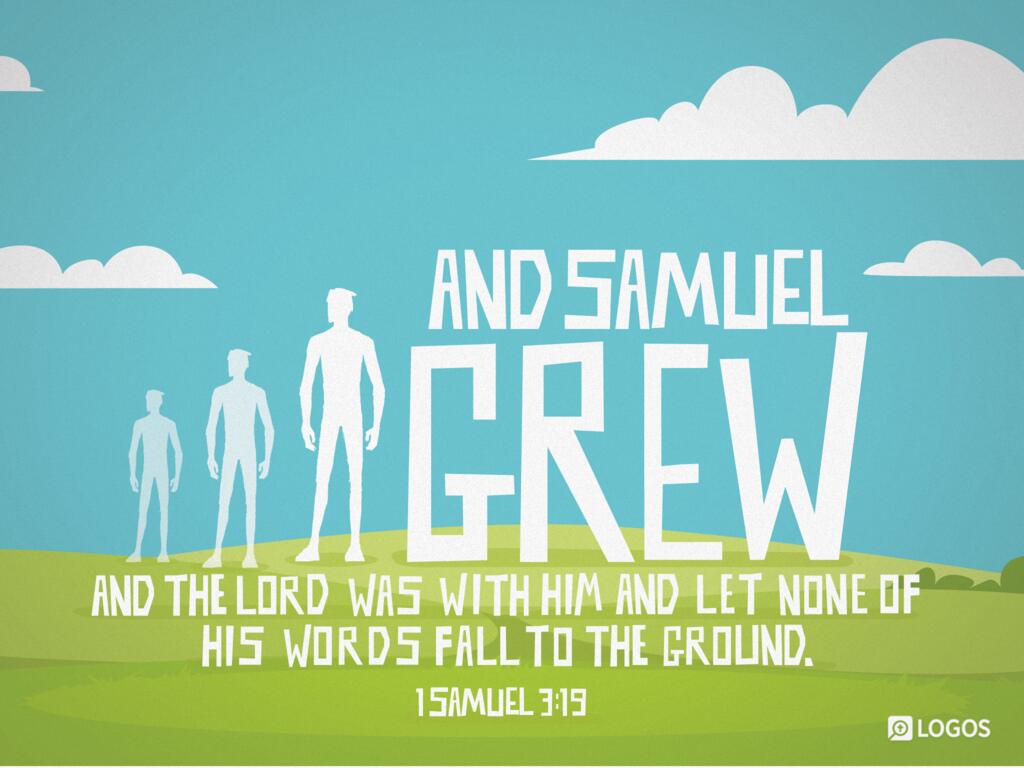 Since the days of Moses (some 400 years before the time of Samuel) there were not many prophets in Israel and certainly no great prophets. At this important time in Israel’s history, God raised up Samuel as a prophet.

Coming in this place in Israel’s history, Samuel is rightly seen as Israel’s last judge and first prophet. Samuel bridges the gap between the time of the judges and the time of the monarchy when prophets such as Nathan, Elijah, and Isaiah influenced the nation.

When did the Lord first appear in Shiloh?