The ark of the covenant is now at Kiriath Jearim, guarded by Eleazar. The ark stayed here 20 years until the Israelites rid themselves of foreign gods and Ashtoreths.

All the Israelites gathered at Mizpah where Samuel interceded for them with the Lord. They fasted and confessed their sins. The Philistines, hearing of this gathering, went to Mizpah and attacked. Samuel continued to pray to God and sacrificed a burnt offering. The Lord sent loud thunder, panicking the Philistines. The Israelites routed the Philistines, slaughtering them as they fled beyond Beth Car.

Samuel set a stone to show the Lord helping them. The Philistines did not invade again. Throughout Samuel’s lifetime, Israel regained the land taken from them by the Philistines and there was peace with the Amorites. Samuel served as judge all the days of his life, making his home in Ramah.

9) Part personal question. My answer: Samuel told the Israelites to give up their foreign gods. When they did, he interceded for them with the Lord, offering up burnt sacrifices. He prayed for the people on Israel’s behalf and he served as judge for the people and priest as well. Give up idols and reflect God wherever we are. We need to pray for others and intercede for them with God if need be.

10) They gave up their foreign gods. They confessed their sins. They relied on God when threatened by the Philistines. They had faith. God defeated the Philistines for them and gave them lasting peace. God answered their prayers.

Once your heart is right for God, He is there. All the pieces come together. He protects and saves and prospers. It’s as simple as believing faith in Him.

The ark did not rest in the temple; instead, it rested in the house of Abinadab.

For 20 years, the people weren’t right with God. Their cities were in ruins, their armies were defeated, and they were under Philistine domination. They refused to turn to Him.

Where was Samuel for all this time?

God raised up Samuel as a prophet and a judge (1 Samuel 4:1). Yet Samuel was strangely absent from the whole Ark of the Covenant fiasco. 1 Samuel 4:1 is the last place Samuel was mentioned, right before Israel schemed to use the ark as a good luck charm in battle. We don’t know where Samuel was but presumably in training still.

What was important about repenting to the Lord?

Samuel called the nation to repentance.

The inward was more important than the outward, and it had to come first. That is why Samuel first called Israel to return with all your hearts, then told them to put away the foreign gods.

However, inward repentance is a secret thing. It is hidden. No one can really “see” the heart of another. Yet the inward was proved by the outward. We can know if Israel did return with all your hearts by seeing if they really did put away the foreign gods.

The Israelites were serving two gods and thought they weren’t rejecting him because of this. They felt they only added the worship of other gods to their worship of the LORD. Samuel called on Israel to turn their backs on these other gods and serve Him only.

A ceremonial pouring of water demonstrated the soul poured out before the LORD. It was an expression of emptiness and need. Lamentations 2:19: Arise, cry out in the night, at the beginning of the watches; pour out your heart like water before the face of the Lord.

Israel also expressed their sorrow over their sin by fasting (a message that nothing else really mattered except getting right with God) and by confession (a straightforward claim of guilt and responsibility).

“We have sinned against the LORD.” This is almost exactly what David said when he was confronted with his sin in 2 Samuel 12:13.

With God fighting for them, Israel was invincible. Small faith in the true and living God is more powerful than strong faith in a lie. 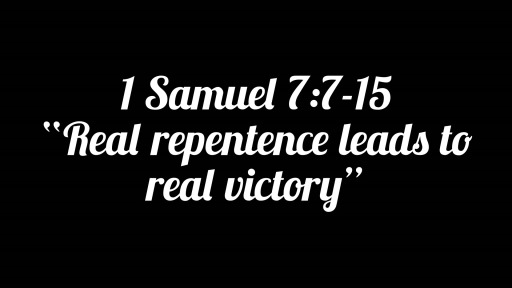 The last time Israel was in this kind of situation they said, “Let’s get the Ark of the Covenant and take it into battle with us. Then we can’t lose!” Now they are much wiser before the LORD, and instead of trusting in the ark they did the right thing and asked Samuel to cry out to the LORD our God for us.

The battle was won before it began because the LORD answered Samuel.

The Bible speaks of Samuel as a mighty man of prayer: Samuel was among those who called upon His name; they called upon the LORD, and He answered them. (Psalm 99:6)

God not only sent thunder, He also sent confusion to the Philistines and confidence to Israel.