Saul, a tall young man, was sent by his father, Kish, to find their donkeys. Saul’s servant suggests they go ask a man of God where the donkeys are because they couldn’t find the donkeys. The man of God is Samuel, and God had told Samuel the day before to anoint a man from Benjamin as the leader of the Israelites. God tells Samuel Saul is the one once Saul meets Samuel. Saul and Samuel ate together.

Samuel took a flask of oil and poured it on Saul’s head, anointing him leader. Samuel instructs Saul, telling him hes’ going to meet 2 men near Rachel’s tomb, 3 men at the tree of Tabor who will give you bread, and then you’ll be changed into a different person when you meet a procession of prophets and prophecy with them. Then Saul is to wait for Samuel at Gilgal. All of this occurred and the Spirit of God descended upon Saul and changed him. 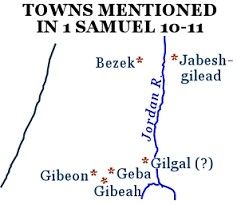 Samuel gathered the people of Israel at Mizpah to present Saul as king. Saul at first hid and had to be brought out. Samuel told the people the regulations of being king and wrote them down. Some were not happy with God’s choice of Saul as king.

3) Directly. God told Samuel the day ahead of time of the circumstances of meeting Saul and that he was a Benjamite and then when Samuel actually met Saul, God spoke again to make it clear His choice. This had to be important for God to be so directly involved.

4) Samuel instructs Saul, telling him hes’ going to meet 2 men near Rachel’s tomb, 3 men at the tree of Tabor who will give you bread, and then you’ll be changed into a different person when you meet a procession of prophets and prophecy with them. Then Saul is to wait for Samuel at Gilgal. All of this occurred and the Spirit of God descended upon Saul and changed him. The king was to be commanded and directed by God and obey God. The prophets such as Samuel were to reveal God’s will to the king. The king, however, can prophesy as well.

5) Part personal Question. My answer:  God speaks directly sometimes, and we should obey. God has a ton of work for me to do from raising my kids to serving Him to my jobs, my writings, and my testimony of my life.

I love God’s directness here in choosing Saul and re-iterating his choice with Samuel. I love how Saul at first shirks his duties and then embraces them, probably out of fear. I think we all are hesitant when called by God to do His work. It’s good to know this is a natural human reaction.

I love how unassuming Saul is as we all are. We all can be called and used by God.

Saul means “asked of God”. He came from a wealthy family and was good-looking and tall.

What do we learn from Saul and the donkeys?

Bible scholar Clarke explains seer: “The word seer, roeh, occurs for the first time in this place; it literally signifies a person who SEES; particularly preternatural [supernatural] sights. A seer and a prophet were the same in most cases; only with this difference, the seer was always a prophet, but the prophet was not always a seer.”

In his ear is literally, “had uncovered his ear.” The same phrase is used in Ruth 4:4. “The phrase is taken from the pushing aside of the headdress in order to whisper, and therefore means that Jehovah had secretly told Samuel” (Smith, Pulpit Commentary). It doesn’t mean Samuel heard an audible voice from God.

God gave the prophet Samuel specific guidance regarding future events. Samuel received this guidance wisely and looked for the fulfillment of the words to confirm God’s choice of a king. But Samuel also wisely refused to manipulate circumstances to “make” what God said come to pass. Samuel felt that if this was God’s word, He was able to make it happen.

Though there were many problems with the reign of Saul, no one should think it was a total disaster. Saul led Israel to many military victories and greater independence from the Philistines.

God confirms his words to Samuel twice. This is something we should look for in our lives: a confirmation of God’s Word.

When Samuel spoke to Saul, he prove to Saul that he was a true prophet from God. He showed Saul he knew things that he probably could not have known unless it was revealed to him supernaturally.

What does the seating arrangement at supper between Samuel and Saul tell us?

The word “anoint” means to rub or sprinkle on; apply an ointment or oily liquid to. The Holy Spirit was poured out onto Saul.

Fun Fact: This is one of the earliest references to prophets in the Bible.

How are Christians anointed?

Kissing was a sign of Samuel’s support of Saul.

It was a secret anointing because it was not yet time to reveal Saul as king to the nation. As Christians, our anointing often comes in just such a private way.

3 Signs Saul knew he was anointed by God:

Prophesying isn’t necessarily predicting the future, but that they all spoke under the inspiration of the Holy Spirit.

What does the group of prophets tell us?

The Holy Spirit was the real anointing.  “Will come upon you” is literally “will leap or rush upon thee, to wit [namely], for a season. So, it may be opposed to the Spirit’s resting upon a man, as in Numbers 11:25; Isaiah 11:2.”

What do we learn from Saul:

Saul had to wait for Samuel because Saul had to show that even though he was a king he was submitted to the LORD and the LORD’s prophet. We’ll see later on that when Saul doesn’t wait for Samuel, disaster strikes. 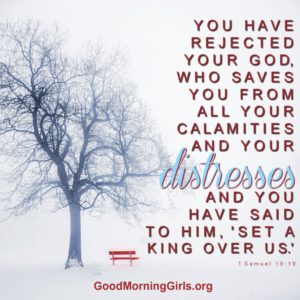 The LORD, speaking through Samuel, showed Israel how their rejection of Him made so little sense. It makes no sense to reject the one who saves you out of all your adversities and your tribulations. Yet so many of us do.

The choosing by lot simply confirmed the word of the LORD through Samuel.

God gave the Israelites what they wanted: a king who looked like a king.

It doesn’t seem that this book Samuel wrote is contained in any of the books of the Bible. This doesn’t mean that there is something missing from our Bibles. It simply means God did not want this book preserved in His eternal Word.

Saul had men to support him.

Bible scholar Meyer on Saul’s ignoring criticism:  “It is a great power when a man can act as though he were deaf to slander, deaf to detraction, deaf to unkind and uncharitable speeches, and treat them as though they had not been spoken, turning from man to God, leaving with God his vindication, believing God that sooner or later will give him a chance… of vindicating the true prowess and temper of his soul.”

Despite all these great advantages, Saul could still end badly. Saul had so many advantages, yet it all comes down to choice. He had to choose to walk in the advantages God gave him and choose to not go his own way. The rest of the book of 1 Samuel shows how Saul dealt with that choice.