The war between the Israelites and the Philistines continues as both sides prepare for battle at Socoh in Judah. A valley separates the two armies.

The Philistines send out a champion, Goliath from Gath, who was over 9 feet tall, wore armor weighing 125 pounds, and carried a spear. Goliath challenges the Israelites to send out a champion to overcome him. Whoever loses becomes the subjects of the other.

The Israelites were terrified of Goliath. Jesse’s 3 oldest sons served in Saul’s army, but David still had to tend sheep at home, so he split his time at the army.

Goliath challenged the Israelites every day for 40 days. Jesse sends David who had been at home to his brothers in Saul’s camp with food for them and their commander and to check on them and bring back a token, so he knows his sons are ok.

David reached camp just as the army was going out to meet the Philistines. David heard Goliath’s challenge and found out that whoever kills Goliath will gain the king’s daughter in marriage and exemption from taxes for his family.

David’s oldest brother, Eliab, yells at David and accuses him of abandoning his duties and his sheep and only coming to visit to see the battle. David walks away. Saul, hearing of David’s return, sends for him. David says he will face Goliath, so no Israelite will lose heart.

9) They faced the Philistines but, in particular, Goliath of Gath, a Philistine who challenged a champion of Israel to a battle to determine who would become subjects of whom. Israel responded by running in fear.

10) Goliath taunted the Israelites by challenging them every day to overcome him. His idea was whoever won the face-off would the other would become the subjects of the winner.

11) David is seeing Goliath as defying God and the armies of God. He also saw the fear Goliath was bringing to the men and the effect this was having on morale. The men ran in fear, having no faith in God to overcome. David instead says he will go and fight Goliath, having faith God will overcome.

12) Personal Question. My answer: I hope I reveal my faith in my words and actions. I trust Him to put me where He wants me. I try to do His work and have faith in His way.

One of the most famous stories of the Bible is David and Goliath. It’s interesting how David’s older brother accused him of wrong motivation, probably because he is jealous of David as the anointed one. I love how David says he’ll face Goliath for others. I always picture David as small (probably in relation to Goliath), so for a small man, he has a huge heart for God. Great lesson!

For a cute, short kids video on David and Goliath, click below

This Valley of Elah of green rolling hills still stand today and is where one of the most remarkable battles in all the Bible and history took place. The Philistines, constant enemies of Israel during this period, assembled their army on a mountain and across from them on another mountain was the army of Israel.

Goliath was tall and probably suffered from Gigantism, a disorder of the pituitary gland that overproduces growth hormones. Men of unusual height have been recorded in ancient times. According to Joshua 11:22 Gath was the home of the Anakim, a race of people known for their height — which supports the belief that gigantism was present in the gene pool as a genetic disorder. Goliath’s weapons (probably weighing between 150 and 200 pounds) matched a man of his size.

Bible scholar Adam Clarke says that the word champion really comes from the Hebrew word, “a middle man, the man between two.” The idea is this was a man who stood between the two armies and fought as a representative of his army.

Why did Goliath challenge the Israelites?

Saul, who stood a head taller than most Israelites, was the likely choice to face off against Goliath. Instead, he fled too. Huge change in heart and spirit from (1 Samuel 14:52) and when the Spirit of the LORD departed from Saul (1 Samuel 16:14).

David was balancing his duties at home with his duties to Saul, traveling back and forth as needed.

David is said to be the youngest of eight sons of Jesse. Yet Psalm 89:27 calls David God’s firstborn, demonstrating that “firstborn” is as much a title and a concept as a description of birth order. Therefore, when Paul calls Jesus firstborn over all creation in Colossians 1:15, he isn’t trying to say that Jesus is a created being who had a beginning. He is simply pointing to the prominence and preeminence of Jesus.

We can picture both armies lining up every day, Goliath taunting the Israelites, and then the Israelites retreating in shame. The situation had become so desperate that Saul needed to offer a three-part bribe including a cash award, a princess, and a tax exemption – to induce someone, anyone to fight and win against Goliath. 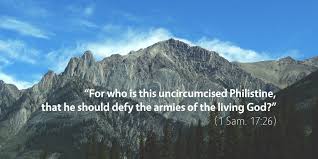 Why was Eliab angry?

How our Friends and Family can Hinder Us

David is not deterred by his brother’s hurtful words, which probably were spoken amidst laugh and jeers at David’s expense. Instead, David is focused on God’s work above all else, his own personal safety, his own personal glory, and his own personal honor. David replied rightfully and answered softly.

Bible scholar Spurgeon on this scene: “Immediately before the encounter with the Philistine he fought a battle which cost him far more thought, prudence, and patience. The word-battle in which he had to engage with his brothers and with king Saul, was a more trying ordeal to him than going forth in the strength of the Lord to smite the uncircumcised boaster. Many a man meets with more trouble from his friends than from his enemies; and when he has learned to overcome the depressing influence of prudent friends, he makes short work of the opposition of avowed adversaries.”

Finally, Saul gets someone to volunteer. However, the volunteer is a youthful boy. We’ll see on Day 5 what this youthful boy knew more than others.