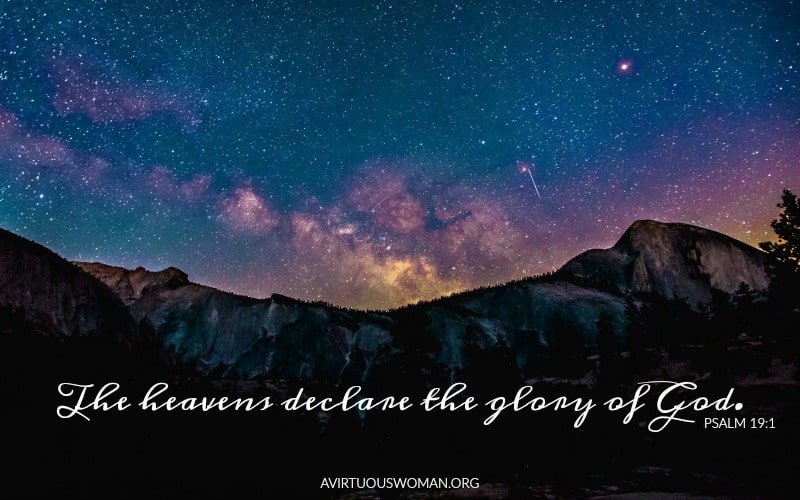 The heavens and skies proclaim God’s existence and His glory. God’s laws are perfect, his commands radiant, his statutes trustworthy. Keeping God’s laws is rewarding. May I follow God’s laws. May my words and heart be pleasing to you, God.

9) All attributes of God are revealed through Creation: his goodness, his perfectness, his omniscience, his omnipotence, his holiness, his justness, his everything.

10) Part personal Question. My answer: Perfect, radiant, right, giving joy to the heart, reviving the soul, trustworthy, making wise simple, giving light to the eyes, sure, altogether righteous, more precious than gold, sweeter than honey, great reward when kept. David said this much more eloquently than I ever could, but I love God’s rules. It gives life structure, meaning, and boundaries. God’s laws are good as He is good.

11) Part personal Question. My answer: Studying God’s Word according to David revives the soul, makes wise the simple, gives joy to the heart, gives light to the eyes, sweeter than honey, warns the servant (us), and rewards us. Studying God’s Word has kept me from totally being full of sin. My knowledge has deepened, my relationship with God is closer, and I grow more and more like Jesus with each passing day. I have hope I can someday be a good person.

Beautiful in its simplicity, God’s law gives us a reason to live and God’s Creation affirms his glory and power.

The title tells us both the author and the audience of the Psalm: To the Chief Musician. A Psalm of David. Some believe that the Chief Musician is the Lord God Himself, and others suppose him to be a leader of choirs or musicians in David’s time, such as Heman the Singer or Asaph (1 Chronicles 6:33, 16:17, and 25:6).

C.S. Lewis said of Psalm 19: “I take this to be the greatest poem in the Psalter and one of the greatest lyrics in the world.”

Aristotle said, “Should a man live underground, and there converse with the works of art and mechanism, and should afterwards be brought up into the open day, and see the several glories of the heaven and earth, he would immediately pronounce them the works of such a Being as we define God to be.”

Astronomer and physicist Robert Jastrow, “For the scientist who has lived by his faith in the power of reason, the story ends like a bad dream. He has scaled the mountains of ignorance; he is about to conquer the highest peak; as he pulls himself over the rock, he is greeted by a band of theologians who have been sitting there for centuries.”

Paul later clarifies David’s sentiments in Psalm 19 in Romans 1. Paul explaines God’s invisible attributes are clearly seen, being understood by the things that are made, even His eternal power and Godhead, so that they are without excuse (Romans 1:20). Because this testimony had gone out through all creation, all men are without excuse for rejecting the God who gave us such clear (and beautiful) evidence of His power and wisdom.

“Pour forth speech” is stronger in the Hebrew text than it appears to be in English, for the image is literally of a gushing spring that copiously pours forth sweet, refreshing waters of revelation.

Philosopher Kant’s famous quote: Two things fill the mind with ever new and increasing admiration and awe… the starry heavens above and the moral law within.”

God’s word tells us much more tells us about God than Creation. It reveals Him as the covenant God of love, as reflected in the structure of this psalm. In Psalm 19:1-6, God is referred to as El – the most generic word for God in the Hebrew language (even more generic than the commonly used Elohim). Yet here at Psalm 119:7-9, God is referred to as Yahweh (the LORD), the God of covenant love and faithfulness to His people. This is the personal name God revealed to Moses from the burning bush (Exodus 3:15).

In Psalm 119, David used a variety of expressions to refer to the word of God (law, testimony, statutes, commandment, fear, judgements.)

How is God’s Word perfect?

The Hebrew word translated here as converting is perhaps better understood as reviving; that is, bringing new life to the soul.

How is God’s Word simple?

How is God’s Word right?

How is God’s Word pure?

How is God’s Word clean?

Here David called the word of God the “fear of the Lord.” One who reads, hears, and studies the word of God  will have an appropriate appreciation of God’s awe and majesty.

Why is the Word of God greater than material wealth?

We all make errors before God; a lot of which we cannot see ourselves.

What are willful sins?

The Progression of Willful Sin:

During this whole time, the Holy Spirit – and hopefully our conscience – warns us to stop. We are given the way of escape by God (1 Corinthians 10:13), if we will only take it. Yet if we do not, and end up in slavery to sin, it legitimately questions the state of our soul (1 John 3:6-9).

Note the man after God’s own heart prayed this. Think of how much then we need to pray this. If we do, as Paul wrote, For sin shall not have dominion over you, for you are not under law, but under grace (Romans 6:14).

David closed this glorious Psalm with a humble surrender of his mouth and heart to God. He knew that real godliness was not only a matter of what a man did, but also of what he said and thought in his heart.

Redeemer is that great Hebrew word goel, the kinsman-redeemer. It was the goel who bought his relative out of slavery; who rescued him in bankruptcy and total loss. It was Boaz in the book of Ruth. King David looked to God Himself as his kinsman-redeemer.

Take away from Psalm 19:

Recognizing the glory of God in creation and the glory of His written revelation, David knew himself to be small and sinful. Yet this great God was also the glorious God of personal relationship and redemption for His people. King David knew this; so should we.