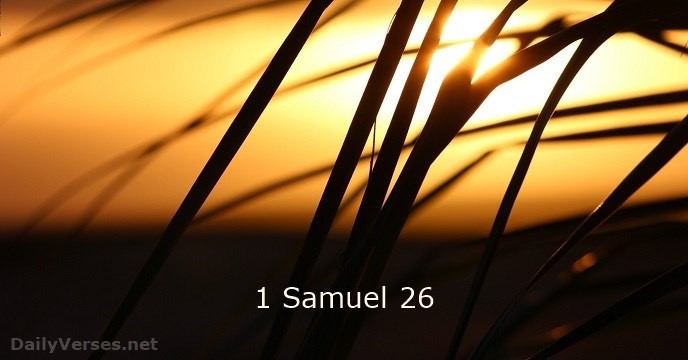 David is ratted out again by the Ziphites (1 Samuel 23:19-23) to Saul who takes 3000 men to the Desert of Ziph to find David. David goes with Abishai to Saul’s camp and finds Saul asleep. Abishai offers to kill Saul with one spear thrust. David again says no — that he cannot lay a hand on the Lord’s anointed and God will deal with him in His time. He takes the spear and the water jug near Saul’s head and departs.

David tells the man guarding Saul he deserves death along with the rest of the men because they failed to protect the king. Saul wakes, and David once again asks why he is pursuing him. Again, we see almost a verbatim repetition of 1 Samuel 24. Saul says he was wrong; David doesn’t trust him; they go their separate ways.

9) This play out almost exactly like 1 Samuel 24. David spares Saul’s life, but he could have just as easily killed him. He probably recognized his harshness with Nabal. David could have gone the other way, but his faith was so strong he didn’t.

10) Same as in 1 Samuel 24. Abishai believes (like the mob in 1 Samuel 24) that God has handed Saul into David’s hands to end his life. David believes he is not to raise a hand against the Lord’s anointed, and thus refuses to do so. David has faith God will deal with Saul (the wicked) in His own time, and he doesn’t worry about it.

11) Part personal Question. My answer: God is faithful, and David’s faith in Saul is unshakeable. God is just as David knows God will deal with Saul. God protects as David knows he won’t be harmed by Saul. I need to remember all God’s truths better: He’s just, fair, merciful, and faithful.

It’s interesting how Saul never gives up when he has to know the outcome. People are stubborn despite God knocking them on the head repeatedly. I love how David won’t kill Saul, but he makes sure to let Saul know he could have. Warnings can be good teaching points (except Saul never learns).

The people of the city of Ziph – had betrayed David’s whereabouts to Saul before (1 Samuel 23:19-23). Now they try to gain King Saul’s favor again, by helping Saul find David again.

Saul goes back on his previous repentance (1 Samuel 24:16-21). At that time David had the opportunity to kill Saul but did not. When David boldly demonstrated this to Saul, the king was greatly moved emotionally and publicly repented for his murderous intentions toward David. Saul’s repentance was deep, sincere, and emotional – but it didn’t last very long as the same thing happens in this chapter.

A a wise and capable commander David constantly monitored the movements of Saul. David knew where Saul was but Saul did not know where David was.

The last time David and Saul met David was simply hiding from Saul, and Saul happened upon the place where David hid. This time David actively sought Saul out.

Why David not kill Saul a second time?

“The Arabs, observing that partridges soon become weary as not to be able to fly hunt them in the mountains till at last they can knock them down with their clubs. Saul hunted David similarly, coming hastily upon him, and putting him up from time to time, in hopes that he should at length, by frequent repetitions of it, be able to destroy him.” (Clarke)

The last time Saul was in this situation (1 Samuel 24), he was overcome with emotion. His feelings seemed right but his life was not changed (1 Samuel 24:16-21). This time there is something cold and mechanical about Saul’s words.

FUN FACT: This will be the last time David sees Saul.