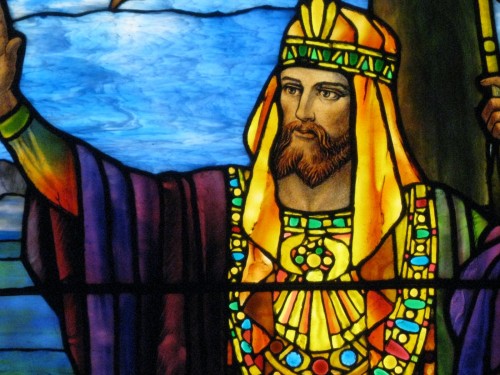 God appears to Solomon after the temple was finished and tells Solomon to follow his laws and decrees and his throne will be established over Israel forever. But if he or his sons turn away and worship other gods, God will forsake them, cut off Israel from the Promised Land, and reject the temple. Israel will be scoffed at and all will know the Israelites disobeyed God.

3) Solomon had finished God’s temple (7 years) and his palace (13 years). He had conquered a vast territory and all of Israel had peace and safety. He had horses and chariots. The land was plentiful.

4) God tells Solomon to follow his laws and decrees and his throne will be established over Israel forever. But if he or his sons turn away and worship other gods, God will forsake them, cut off Israel from the Promised Land, and reject the temple. Israel will be scoffed at and all will know the Israelites disobeyed God. These words were to remind Solomon to choose God and not others gods. It’s to remind Solomon of the consequences of disobedience. It’s to give him another chance before he turns from God.

5) Personal Question. My answer: It means to walk in the ways of Jesus. Follow God’s words and follow God’s and Jesus’s heart for others and the world. It’s relevant to me every day as I try to remember to do what Jesus would do, put others first, and care about others.

Even though God doesn’t appear to us today like He did in OT times, he still reminds us of the blessings we will receive if we walk in His ways and the consequences if we don’t. We see this in the choices we make every day: whether to live God’s way or our own.

This was 24 years after Solomon came to the throne. The temple and the palace work at Jerusalem were finished. Now Solomon had to deal with life after completing his greatest accomplishment.

“It was the hour when the accomplishment of work means the relaxation of effort. That is always a perilous hour, and the greater the work done the graver the peril. A life which has been full of activity, when that activity ceases, demands some new interest, and will find it, either high or low, noble or ignoble.” (Morgan)

God appeared to Solomon at the beginning of his reign (1 Kings 3:5-9), which was gracious. It was even better of God to appear to Solomon a second time.

The great prayer of Solomon in 1 Kings 8 meant nothing unless God heard the prayer. The true measure of our prayer is if God in heaven answers the prayer.

Did God hear Solomon’s prayer? This answer seems to have come many years after the actual dedication of the temple. Yet God also gave Solomon an immediate answer of approval at the time of dedication, when the sacrifices were consumed with fire from heaven (2 Chronicles 7:1-7)

“Man builds; God hallows. This cooperation between man and God pervades all life. Man performs the outward and mechanical; God the inward and spiritual” Meyer

God’s answer to Solomon’s prayer had one condition: If Solomon walked before God in obedience and faithfulness, he could expect blessing on his reign and the reign of his descendants, and the dynasty of David would endure forever.

Note God did not demand perfect obedience from Solomon. David certainly did not walk perfectly before the LORD, and God told Solomon to walk before Me as your father David walked. However, this was definitely within Solomon’s realm of possibilities.

The positive promise of 1 Kings 9:1-5 was followed by a negative promise: If Solomon or his descendants were to turn from following the LORD, God promised to correct a disobedient Israel.

Thus, God answered Solomon’s prayer in 1 Kings 8, but it was not an unqualified promise to bless the temple in any circumstance. God blessed the temple and filled it with the glory of His presence, but he would cast it out of His sight if the kings of Israel forsook the LORD.

With such a glorious temple, Israel would be tempted to forsake the God of the temple and make an idol of the temple of God. Here the LORD made them know that He would not bless them if so

Under the Old Covenant, God promised to use Israel to exalt Himself among the nations one way or another. If Israel obeyed, He would bless them to the point that others had to recognize the hand of God upon Israel. If Israel disobeyed, He would chastise them so severely that the nations would be astonished at the hard work of God among His disobedient people, and they would know that the LORD has brought all this calamity on them.