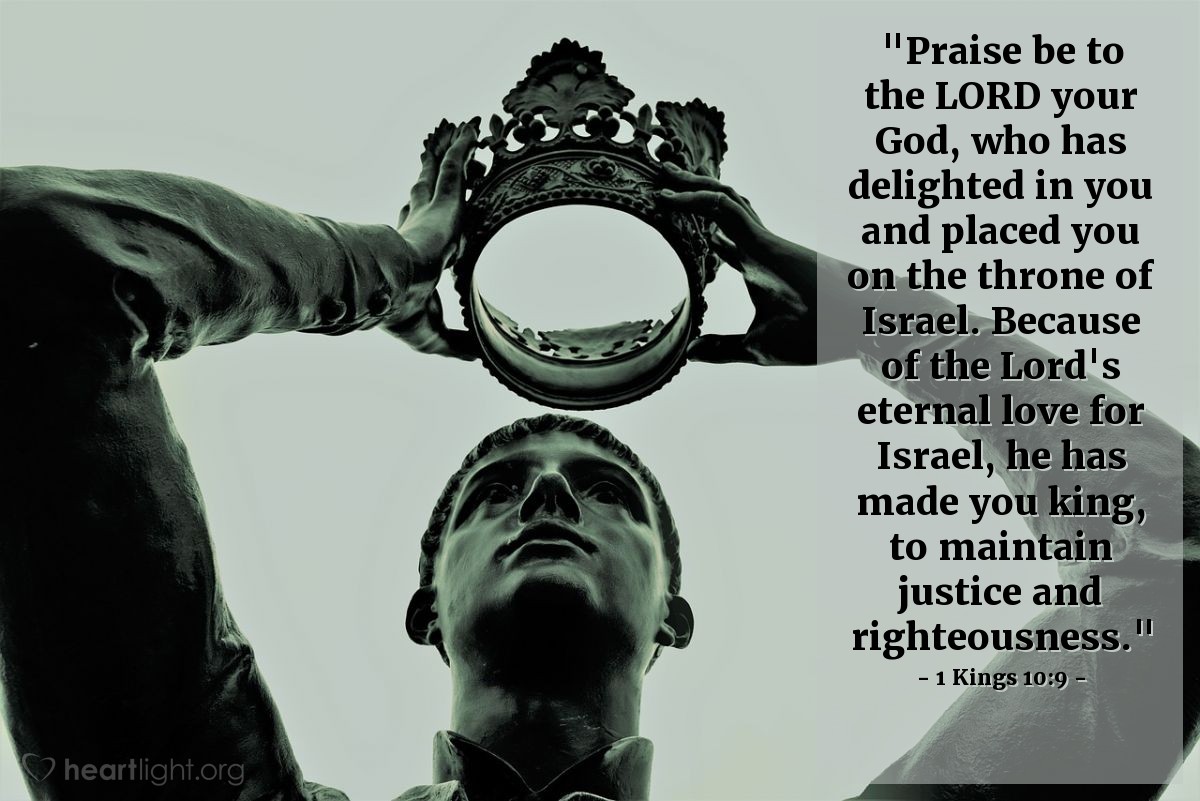 The Queen of Sheba visits Solomon, having heard of his wisdom and wealth, to see for herself. She arrives in Jerusalem with camels, spices, gold, and precious stones. He answered all of her questions. She praised him for his wisdom and praised God who put him on Israel’s throne to maintain justice and righteousness. She gave him gold, spices, and precious stones. Solomon gave her gifts in return.

9) The Queen of Sheba had heard about Solomon’s fame and about his relationship with God, so she came to test him with hard questions. She was impressed by his answers to all her questions, his wisdom, his palace and food, his officials, his servants and cupbearers, and the burnt offerings he made to God.

10) She concluded that his men and officials must be happy. She concluded that God delights in Solomon and has placed Solomon on Israel’s throne  because He loves Israel and wants to see justice and righteousness amidst His people.

11) Part personal Question. My answer:  Solomon and Jesus are both wise. Both were kings. Solomon died. Christ died, but rose again. Both were promised to reign forever. Only Jesus fulfilled that promise. Both do things for their people. Solomon is influenced by sin, so he eventually falls away from God; whereas, Jesus never does. Both face temptation. Solomon gives in; Jesus does not.  I am not wondering if Jesus is all that he claims to be. I don’t have any hard questions for Jesus. Life is how it is because we are sinners. I wonder about things, but who doesn’t? I don’t question Jesus, however.

I find this story fascinating. It is a lost tradition these days to visit people of renown, seek their wisdom, and exchange gifts. In ancient times, this happened all the time between rulers. Our leaders do this somewhat today, but it seems it’s not as meaningful. I like how because of Solomon’s example of following God, the Queen came. We can do the same thing. Lead a Godly life, and others will follow our lead.

Sheba (also known as Sabea) was where modern-day Yemen is today (Southern Arabia). We know from geography this was a wealthy kingdom with much gold, spices, and precious woods. History also tells us that they were known to have queens as well as kings.

She came to Solomon and Israel at their material zenith. The great prosperity, splendor, and wisdom of Solomon’s kingdom were internationally famous.

This queen traveled in the manner of queens, with a large royal procession, heavily laden with gifts and goods for trade.

This Queen was obviously familiar with the world of royal splendor and luxury. Yet she was completely overwhelmed by the wisdom of Solomon and the glory of his kingdom.

The Blessings of God

This is what God wanted to do for Israel under the promises of the Old Covenant. God promised Israel that if they obeyed under the Old Covenant, He would bless them so tremendously that the world would notice and give glory to the Lord God of Israel. 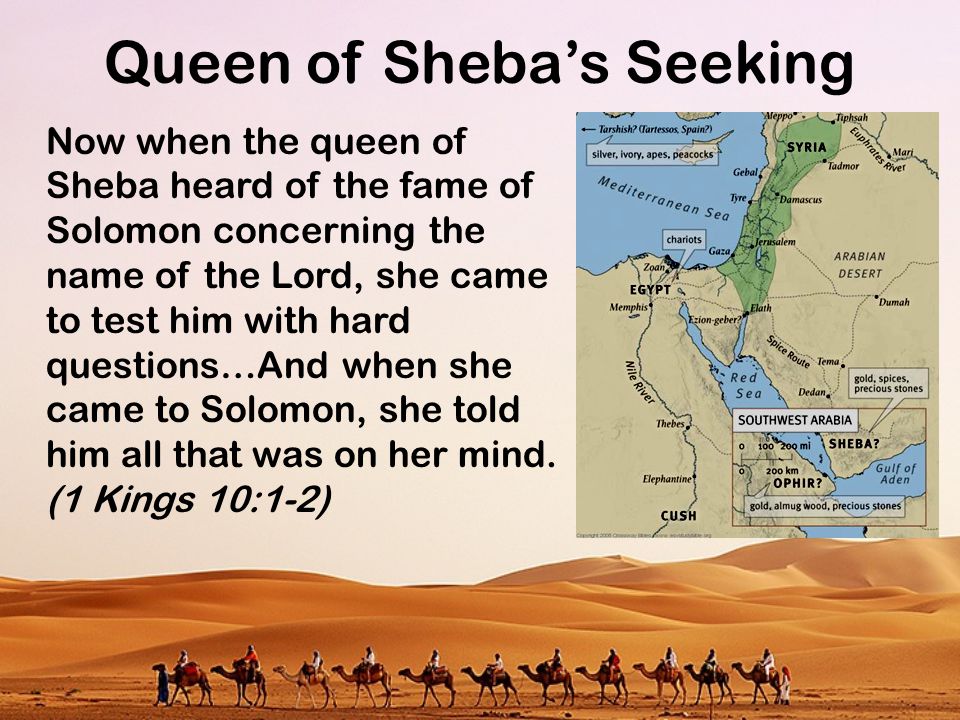 The Queen of Sheba

The Queen of Sheba is an example of a seeker. Solomon impressed her with his wealth, his splendor, and personally. But she returned home without an evident expression of faith in the God of Israel. This shows that impressing seekers with facilities, programs, organization and professionalism isn’t enough.

Qualities of a Seeker we see in the Queen of Sheba:

Solomon was not necessarily the most logical successor of his father David. There were several sons of David born before Solomon. He was indeed the Lord’s choice to lead His people.