Solomon accumulated gold and shields. He made a huge throne of ivory and gold. Everything was made of gold. He engaged in foreign trade with gold, silver, ivory, apes, and baboons. Solomon was greater in riches and wisdom than any other earthly king. Everyone sought his advice and gave him gifts in return. Solomon accumulated chariots and horses, and silver was common in Jerusalem.

David prays for Solomon. He asks God to endow him with justice. The people will prosper. He will defend the afflicted and help the children of the poor. Solomon will endure and be prosperous. All kings will bow to him. May he live long and his name endure forever. Let all nations be blessed by him. Praise to God.

12) Part personal Question. My answer. Solomon was just to the people. He judged in righteousness. He defended the afflicted and saved the children of the needy. He lived a long life. He ruled a vast area. The desert tribes bowed before him. He was brought tribute by distant kings. The kings of Sheba and Seba presented him with gifts. All kings will bow down to Solomon and serve him. He rescued the needy. People prayed for him and blessed him. The land was plentiful. His name endures forever. All nations were blessed by him, and they called Solomon blessed. It doesn’t really encourage me to pray. We should be praying for all those lost anyways and for all we know to prosper, for those who are suffering, and for God to show up in lives and bless people.

13) Part personal Question. My answer: When you have great wealth, you have great responsibility.  People want to learn from you, and you are obligated to help them be better people. You also have an obligation to take care of those less fortunate than you — both financially and with your time. My lesson is when you’re successful, you need to help others who are struggling. Share your wealth. Bless others.

This shows the power of prayer of parents for their children. King David prayed powerfully for Solomon, and God granted all of David’s requests. Solomon was indeed blessed by God, in part because of David’s faithfulness to God. It also shows the power of God’s blessings when you walk in His ways.

This was a vast amount of gold, which came to Solomon yearly. One commentator estimated the value of the 666 talents of gold at $281,318,400. According to the value of gold in 2015, it would be just under $1 billion dollars. This speaks not only to the great wealth of Solomon, but it also makes him the only other person in the Bible associated with the number 666.

The other Biblical connection to 666 is the end-times world dictator and opponent of God and His people often known as the Antichrist (Revelation 13:18). In fact, the Revelation passage specifically says that the number 666 is the number of a man, and the man may be Solomon. This isn’t to say that Solomon was the Antichrist or that the coming Antichrist will be some strange reincarnation of Solomon.

1 Kings assumes that we know of the instructions for future kings of Israel in Deuteronomy 17:14-20. God blessed Solomon with great riches, but Solomon allowed that blessing to turn into a danger because he disobediently multiplied silver and gold for himself. 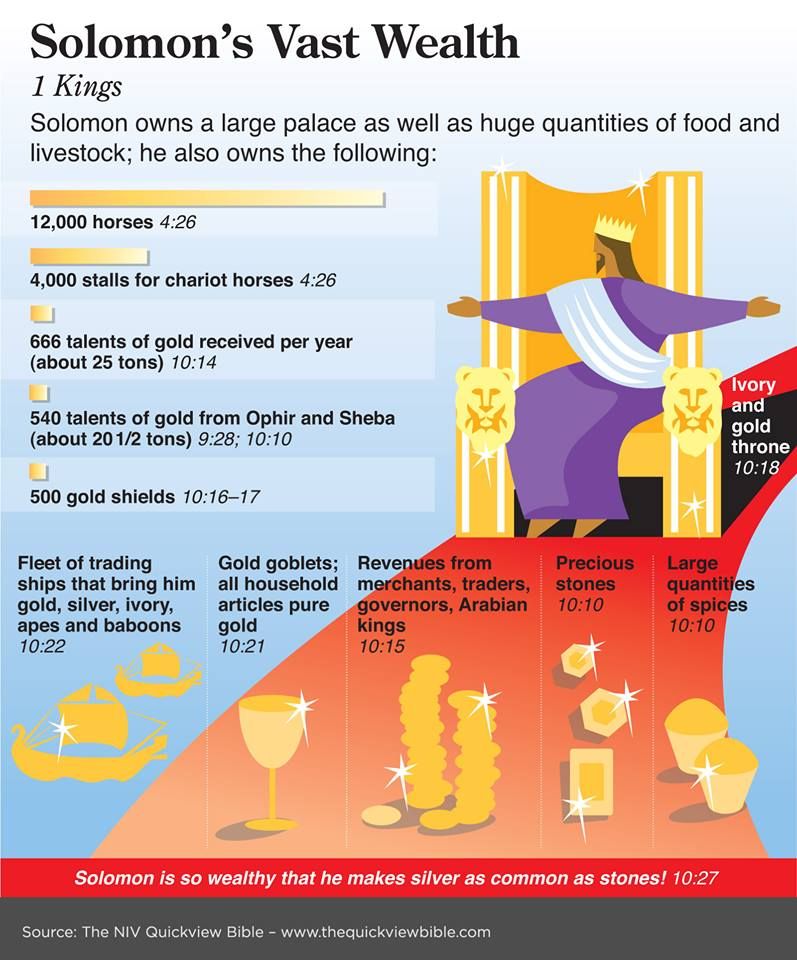 The promises of Deuteronomy 28:1-14 were fulfilled in his reign: The LORD will open to you His good treasure, the heavens, to give the rain to your land in its season, and to bless all the work of your hand. You shall lend to many nations, but you shall not borrow(Deuteronomy 28:12).

Remains of Solomon’s fortress and stables at Megiddo can be seen today.

When we think of Solomon’s great wealth, we also consider that he originally did not set his heart upon riches. He deliberately asked for wisdom to lead the people of God instead of riches or fame. God promised to also give Solomon riches and fame, and God fulfilled His promise.

Solomon gave an eloquent testimony to the vanity of riches as the preacher in the Book of Ecclesiastes. He powerfully showed that there was no ultimate satisfaction through materialism. We don’t have to be as rich as Solomon to learn the same lesson.

Multiplying horses was in direct disobedience to Deuteronomy 17:16, which said to the Kings of Israel: But he shall not multiply horses for himself, nor cause the people to return to Egypt to multiply horses, for the LORD has said to you, “You shall not return that way again.”

Solomon traded in horses with the kings of the Hittites and Syria. Solomon could have used this as an excuse, saying he was not using the horses for himself. Many examples of gross disobedience begin as clever rationalizations.

The title of this Psalm is, A Psalm of Solomon. It is possible to translate the Hebrew here (and in almost all the Psalms which reference an author) as “A Psalm to Solomon,” and some have regarded it as David’s Psalm to and about his son Solomon and his Greater Son the Messiah. Yet, the most natural way to take the title is as it is given, A Psalm of Solomon and that the line about David in 72:20 refers to the collection of Book Two of the Psalms, which is heavy with David’s Psalms, separating it from Book Three, which begins with 11 Psalms authored by Asaph.

It is possible that Solomon complied this second book of the Psalms (Psalms 42-72) and composed this Psalm as a fitting conclusion for the collection of mostly David’s Psalms. It is a fitting conclusion, because it unexpectedly does not focus upon David himself, but on the Messiah – the King of Kings and the Son of David.

“The New Testament nowhere quotes it as Messianic, but this picture of the king and his realm is so close to the prophecies of Isaiah 11:1-5 and Isaiah 60-62 that if those passages are Messianic, so is this.” (Derek Kidner)

“Righteousness dominates this opening, since in Scripture it is the first virtue of government, even before compassion (which is the theme of verses 12-14).” (Kidner)

Sometimes mountains represent human governments in the Bible, and David may have intended this allusion. He had in mind a national government (mountains) that blessed the people and local government (the little hills) that ruled with righteousness. This godly government would accomplish at least three things:

However, the mountains could stand for something else: 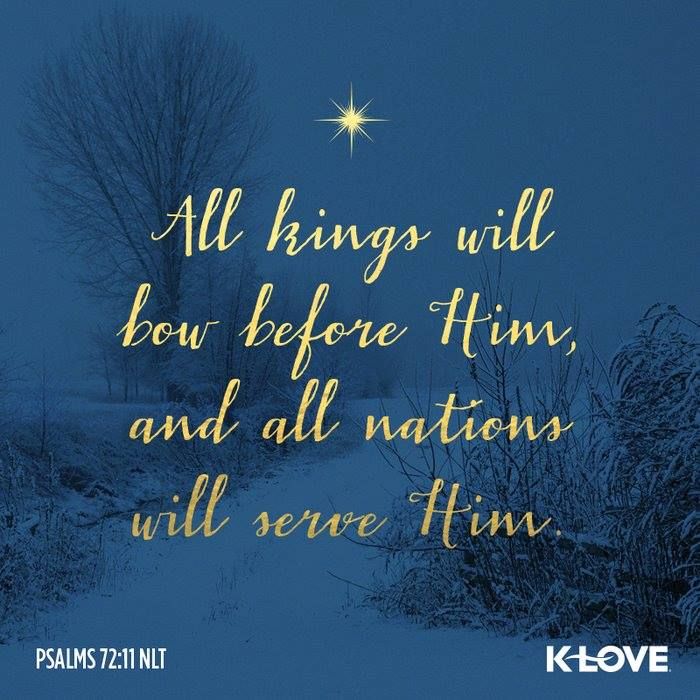 “Bear in mind that it was a custom with many nations that, when individuals approached their kings, they kissed the earth, and prostrated their whole body before them. This was the custom especially throughout Asia.” (LeBlanc, cited in Spurgeon)

All kings shall fall down was prophesied in a beautiful word from the prophet Nathan in 2 Samuel 7, which had in mind both David’s immediate son and successor (Solomon) and David’s ultimate Son and Successor (Jesus the Messiah). Both were in view in 2 Samuel 7:11-16, and both are in view in Psalm 72. The fulfillment in Solomon’s day is described in 1 Kings 10:23-25

“Tarshish may have been Tartessus in Spain; it was in any case a name associated with long voyages; likewise the isles or ‘coastlands’ were synonymous with the ends of the earth: see, e.g. Isaiah 42:10.” (Kidner)

Blessed as it was, Solomon’s own reign did not live up to this fully. After his death they complained of his oppression (1 Kings 12:4). “Solomon continues to speak more wisely than he was ever to act.” (Kidner)

The lives of the poor and needy are often considered to be of little value. The Messiah, the Greater King, will regard their life as precious. This is especially meaningful when we consider the cheap regard for life outside and before the world influenced by Christianity. 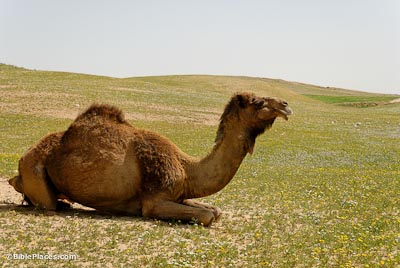 Commentators debate verses 15-17 if the He spoken of here refers to the ransomed man of the previous lines or of the King who ransomed him. Since the previous lines speak of a multitude redeemed and this He speaks of One, and because the following lines fit much better with the King, we regard He shall live as both a wish and a declaration for the King.

“How little this might mean is obvious from the address, ‘O king, live forever’, in the book of Daniel; yet also how much, can be seen from the Messianic prophecies and from the way these were understood in New Testament times.” (Kidner)

The Greater King would receive gifts and honor and praise. He would bestow great blessing on the earth (an abundance of grain in the earth) and upon His people (those of the city shall flourish).

“Gold, grain, and fruit were ancient measures of prosperity. So this is a way of saying that under the reign of Jesus there will be prosperity of every conceivable kind.” (Boice)

Psalm 72 speaks powerfully of the kingdom of the King of Kings and speaks of it in terms of His personal rule, not ruling through an institution such as the Church. “In this Psalm, at least, we see a personal monarch, and he is the central figure, the focus of all the glory; not his servant, but himself do we see possessing the dominion and dispensing the government. Personal pronouns referring to our great King are constantly occurring in this Psalm; he has dominion, kings fall down before him,: and serve him; for he delivers; he spares, he saves, he lives, and daily is he praised.” (Spurgeon)

There is also a tragedy in this Psalm. As high as it soars with the concept of the king and his reign, we remember the sad disappointment of how quickly the monarchy in Israel declined after Solomon. There were certainly some good kings after Solomon, but the glory of the kingdom went from Solomon’s gold (1 Kings 10:16-17) to Rehoboam’s bronze (1 Kings 14:25-28) in only about five years.