A man named Simon had been practicing sorcery and amazing the people in Samaria.  He was boastful and loved the people’s attention.  They thought him divine.  But then Philip shows up, preaching the Good News, and performing real miracles.  So Simon follows Philip everywhere, trying to learn his secrets (not truly believing in miracles himself).

The apostles Peter and John traveled to Samaria to pray for the people to receive the Holy Spirit.  Simon, seeing this, offered to pay for the ability to give people the Holy Spirit as well.  Peter tells him to keep his money for his heart is wicked, to repent and pray for forgiveness.  Peter and John return to Jerusalem, stopping in many Samaritan towns along the way.

An angel tells Philip to follow the road to Gaza.  Along the way, he meets an Ethiopian eunuch, an important official to the Queen of Ethiopia.  He is reading the book of Isaiah.  Philip asks him if he understands and the eunuch said, “How can I unless someone explains it to me?”

He was reading Isaiah 53 where Isaiah is speaking about Jesus so Philip explained this to him.  Philip baptized the eunuch and the Spirit of the Lord whisked Philip away to Azotus where he continued preaching until he reached Caesarea.

6) A man named Simon had been practicing sorcery and amazing the people in Samaria.  He was boastful and loved the people’s attention.  They thought him divine.  But then Philip shows up, preaching the Good News, and performing real miracles.  So Simon follows Philip everywhere, trying to learn his secrets (not truly believing in miracles himself). He followed Philip everywhere and even was baptized in Jesus’ name. Simon then saw how Peter and John were laying hands on people and giving them the Holy Spirit. Simon was impressed, so he asked them to give him this ability as well. He offered to pay for it. This is the indication that he never believed; he was only following Jesus for what Jesus could give to him and not vice versa.

Thus, I think Simon merely professed, looking still for attention. He is full of greed, manipulation, and self-aggrandizement.

7) Persoanl Question. My answer: God knows everyone’s heart. Peter calls out Simon and his hypocrisy and Simon then is worried about what will happen to him. we need more people to call out hypocrisy when they see it. One cannot deceive the Holy Spirit.  He knows your heart and your true motives.  Only those who are worthy will have the Holy Spirit within.  Those who are evil will not.  Simon was not struck down for his manipulation like Ananias and Sappira were but he was denied God’s gift.

8a) Jesus was all of those things that Isaiah describes:  pierced for our transgressions, despised and rejected by men, and crushed for our iniquities.  We, the sheep, had turned our own way so God laid on Jesus all of our sins.

b) Personal Question. My answer: My desire is what it always is: to live out God’s truth every day of my life the best I can to my abilities.

Last go around, we had to read all of Isaiah 53 along with this passage. In the study of Isaiah, one whole week was spent on Isaiah 53, which should tell you something of its importance. You can see Isaiah’s lessons here: Click here, here, and here.

2011’s Study of Acts is here for this passage HERE

In the Bible sorcery is associated with occult, magical practices – and often with the taking of mind and mood altering drugs. Whatever real power Simon had, it was from Satan, not God.

i. The specific wording indicates that Simon was a magi. In the ancient world there was a class of astronomers and scientists known as magi (Matthew 2:1), but local wizards and sorcerers also took the title. They used it to prey on the ignorance and superstitions of the common people.

Up until Acts 8:13, there is nothing to indicate that Simon’s belief was false or insincere. Yet it will be tested by his conduct and response over time.

Often, the empowering and filling of the Holy Spirit is received as hands are laid on a person and prayer is offered for them (Acts 9:17, 1 Timothy 4:14, 2 Timothy 1:6). We should always be ready to receive whatever special graces and gifts God has to give us through the laying on of hands.

Fun Fact: Simony is the word for the sin of buying or selling church offices or privileges, because it is done in the same spirit as this Simon. This sin is sometimes practiced today; but more commonly people simply think that blessing follows money instead of money following blessing.

Boice observed: “When Peter says, ‘You have no part or share in this ministry,’ it is interesting that he employs the same words Jesus used for him when Peter had objected to Jesus’ washing his feet in the Upper Room. Jesus said, ‘Unless I wash you, you have no part with me’ (John 13:8). Strong words. Still Peter was not an unbeliever; he was just out of the will of God.” (Boice)

Without doubt, Simon was headed in the wrong direction, so he needed this rebuke. We don’t know what happened to Simon, as he disappears from Scripture. We won’t know until we get to heaven if Simon ever did believe or not.

Phillip and the Ethiopian

Ethiopia in ancient times was much larger than modern-day Ethiopia. It was the land where the Queen of Sheba came from, who saw the glory of Solomon’s kingdom and professed faith in the God of Israel. It’s possible that pieces of the Jewish faith were passed on through the centuries to men like this servant of the queen. Candace was the title for certain female royalty in Ethiopia.

The Ethiopian was a rich man, a man of power, and at least in some way a celebrity. Yet Philip knew he needed Jesus just a much as anyone else. We should never fear speaking to those who are considered to be important people about Jesus.

We often shrink back from speaking boldly about Jesus, and the world lets us know we shouldn’t talk about such things. But the world does not hesitate to impose its own message on us. We should be just as bold to the world about Jesus as the world is bold to us about sin.

It was common in the ancient world to read aloud. Philip knew what the Ethiopian was reading by listening as he read.

Philip knew at that moment that God had given him an open door, a prepared heart. Plainly, God had arranged this meeting between Philip and the Ethiopian; this is a wonderful example of how God opens doors for evangelism. God directed Philip because God had already arranged an open door.

Sometimes we all need guidance to understand the Bible. 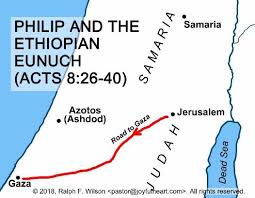 We really can begin at any Bible passage and find where it leads to Jesus.

Too many preachers today focus on what we must do for God, but the gospel begins with and is founded upon what God has done for us in Jesus Christ.

This shows that Philip started preaching not only to Samaritan cities, but also the Gentile cities – such as Caesarea. This is the very beginning of the gospel’s spread to the end of the earth – as Jesus commanded in Acts 1:8.

Fun Fact: Philip is the only one in the New Testament specifically given the title, “The Evangelist” (Acts 21:8). Acts 21:8  as we end this passage with him in Caesarea, doing his work of evangelism.