Those who had been scattered when Stephen died  traveled as far as Phoenicia, Cyprus, and Antioch preaching to the Jews there.  However some men from Cyprus and Cyrene began to speak to the Greeks as well in Antioch about Jesus.  As a result, many Greeks believed.

Jerusalem sent Barnabas when they heard the news to help.  Then Barnabas traveled to Tarsus to bring Saul to Antioch to help preach the Good News.  For a whole year Saul and Barnabas preached the Good News, and it was here at Antioch that the term Christians was first coined.

More prophets arrived from Jerusalem.  One of them, Agabus, predicted a severe famine for the entire Roman world (which was most know places).  The disciples decided to help their brothers in Judea during this time.

12)  Antioch was the third-largest city in the Roman empire.  It sat at a crossroads between the Mediterranean and the eastern world.  It was a huge trading center and had a large Jewish and Greek population.  It was the first church with a large number of Gentile members and from here the first missionaries were sent out to spread the Gospel.

13) Personal Question. My answer: This blog. My work. Continue to pray for strength to continue as there are days where I am just tired.

Another great example of the church growing and God using people to grow the church.

The first mission to the Gentiles begins in Antioch.

Antioch was founded about 300 B.C. by Seleucus I, one of the inheritors of Alexander the Great’s empire. He named many cities after his father, Antioch, about fifteen in total. This city of Antioch was called “Syrian Antioch” or “Antioch on the Orontes.” In the first century, it was a city of more than half a million people; today it is a Turkish city with a population of about 3,500.

Antioch was about 300 miles (480 kilometers) north of Jerusalem and about 20 miles (32 kilometers) inland from the Mediterranean Sea. Many considered Syrian Antioch the third greatest city in the Roman Empire, behind Rome and Alexandria. Antioch was known for its business and commerce, for its sophistication and culture, but also for its immorality. 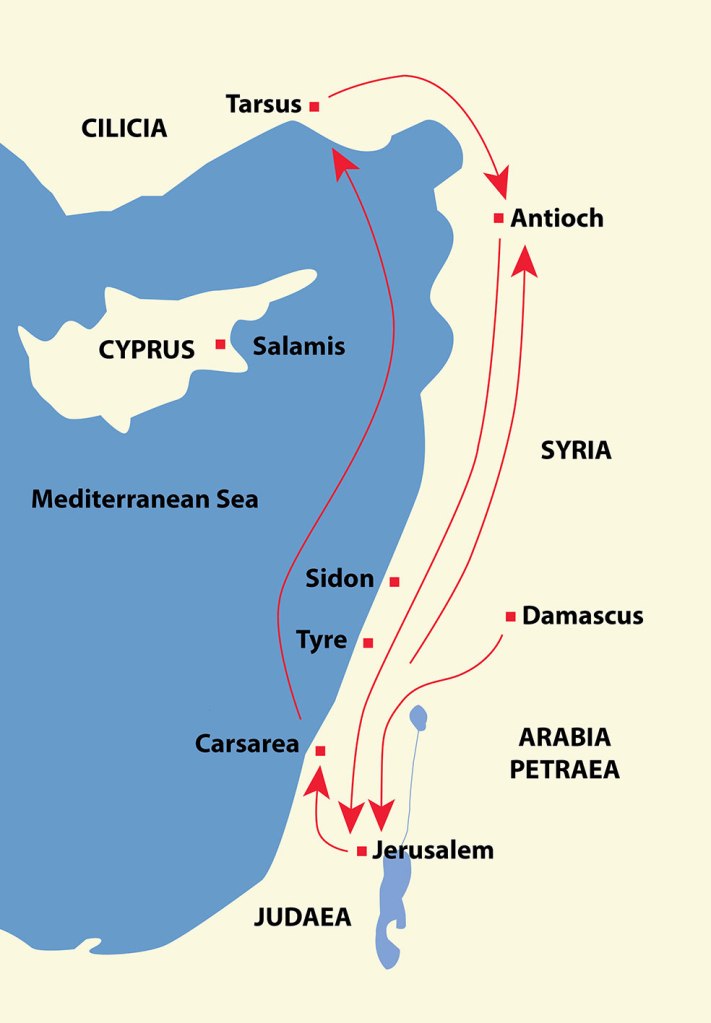 “The city’s reputation for moral laxity was enhanced by the cult of Artemis and Apollo at Daphne, five miles distant, where the ancient Syrian worship of Astarte and her consort, with its ritual prostitution, was carried on.” (Bruce)

This is the plan for church growth spoken of in Ephesians 4:11-16. Leaders in the church dedicate themselves to building strong, healthy Christians. As the saints are equipped for the work of the ministry, they grow into maturity, and do their ministry, and it causes growth of the body.

Barnabas remembered the precious brother Saul, and how he was sent to Tarsus for his own protection (Acts 9:28-30). Now Barnabas went and found him.

Barnabas was probably exhausted and overwhelmed by all the work and opportunities in Antioch, and then remembering Saul of Tarsus.

To seek Saul is more literally to hunt him up. MacArthur says the original word “suggests a laborious search on Barnabas’ part.” Saul was so valuable to Barnabas that it was worth it for him to leave the work in Antioch for a season and search hard to find him.

Antioch became a center for great teaching and preaching. Antioch “had the greatest preachers – in the first century Barnabas, Paul, and Peter; in the second Ignatius and Theophilus; in the third and fourth Lucian, Theodore, Chrysostom, and Theordore.” (Hughes)

The Introduction of the Name Christian

In Latin, the ending ian meant “the party of.” A Christ-ian was “of the party of Jesus.” Christians was sort of like saying “Jesus-ites,” or “Jesus People,” describing the people associated with Jesus Christ. Boice thinks the idea was that they were called “Christ-ones.”

Also, soldiers under particular generals in the Roman army identified themselves by their general’s name by adding ian to the end. A soldier under Caesar would call himself a Caesarian. Soldiers under Jesus Christ could be called Christians.

In Antioch, they probably first used the term Christians to mock the followers of Jesus. The believers appreciated the title so much that it stuck.

Fun Fact: Luke is the only New Testament author to date his books by referring to Roman emperors. He refers to Claudius three times in the book of Acts. All of the events in Luke’s Gospel occur during the reigns of Tiberius and Augustus.