From Troas Paul head to Assos, Mitylene, Kios, Samos, and then Miletus.  He avoided Ephesus because he wanted to reach Jerusalem by Pentecost.  But he sent for the elders of Ephesus to come to Miletus to speak with him.

Paul tells them he lived a life of humility and tears as he served the Lord.  He preached helpful words to both Jews and Greeks about having faith in Christ and repenting to God.  Paul is compelled by the Spirit to go to Jerusalem where he knows he will face prison and hardships.  His life is worth nothing to him if only he will finish the race and complete the task set out for him by Lord Jesus.

They won’t see him again so they must keep watch over the church and believers.  They must be on their guard for wolves will lurk and try to hurt the believers.  He commits them to God who can build them up and give them an inheritance.  We must help the weak, work hard, and remember Jesus’ words “It is more blessed to give than to receive.”

Then Paul boards a ship to Cos, Rhodes, Patar, Phoenicia, Syria, Tyre (where he stayed to encourage disciples and prayed), Ptolemais, and then Caesarea.  Here, the prophet Agabus bound his own hands and feet in warning to Paul about what will happen to him in Jerusalem.  Paul says he is ready to die for Jesus and his companions finally said, “The Lord’s will be done.”

13) Personal Question. My answer:  Paul doesn’t really say good bye to the Ephesians. He sails past Ephesus, in a hurry to return to Jerusalem. Instead, he calls the elders of Ephesus to him. He tells them how he has preached the Good News to them, served the Lord with humility. But he has to finish the race the Lord has laid for him, and that means he won’t see them again. He is innocent of all blood of me. He advises them to watch themselves and the flock and be shepherds of the church of God. To be on guard against those who will distort the truth to draw them away from God. He commits them to God and tells them to help the weak. He prayed for them, wept, kissed and hugged them goodbye. Unsure about being relevant to my life today, excpe the part of finishing the race that God has for me. I think we all have to move on, leave people behind that we care for, because God calls us someplace else. This is what Paul is facing now.

14) “They must turn to God in repentance and have faith in our Lord Jesus.” Verse 21 Grace, faith, and repentance are fundamental to our fath and to who God is. He offers us grace; we believe in faith; we repent of our sins to be forgiven and to be able to stand with a holy God.

15) Personal Question. My answer: Paul is ready to live and die for Jesus. When it comes down to it, I wonder if I am. Saying you live by the Lord’s will and doing so are two different things. When something bad happens, we ask God “Why?” when we really should be asking “Why not?”

You definitely can feel Paul’s heart here for his people. Leaving is such sweet sorrow, but we have the internet to keep up with our family. They have nothing. It really was saying goodbye to someone you would never see again. We can’t imagine this, but it must have been heart-wrenching. 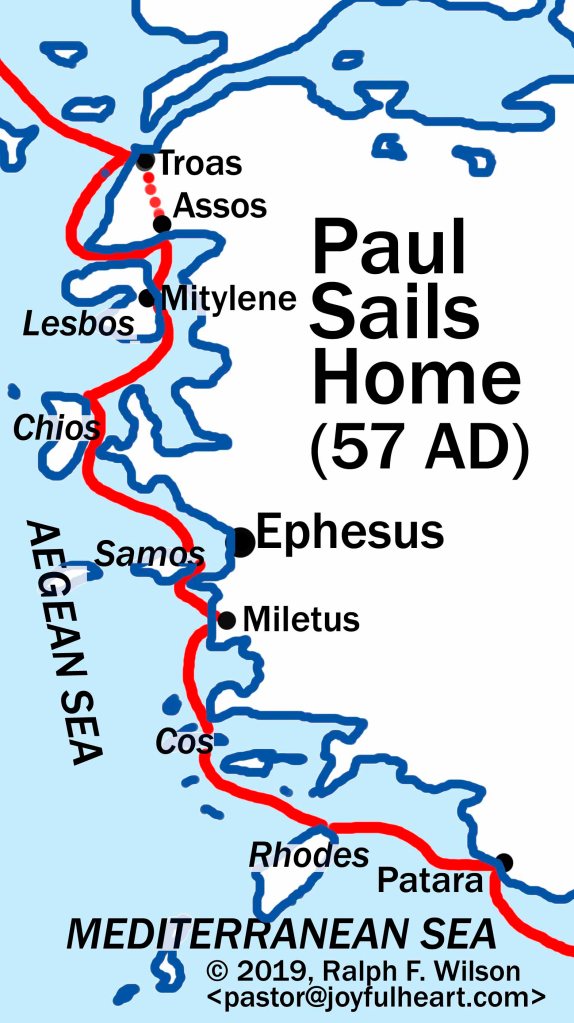 Paul apparently preferred to walk from Troas to Assos instead of sail with the rest of his group; but he sailed with them from Assos to Miletus.

Paul “stayed till the last possible moment, probably to be assured of Eutychus’s complete restoration to consciousness and health, and then took a shortcut by land to join the ship at Assos.” (Bruce).

Paul wanted to get to Jerusalem for the Day of Pentecost, so he met with the elders instead.  “It is the only Pauline speech delivered to Christians which Luke has recorded, and it is not surprising to discover how rich it is in parallels to the Pauline letters (especially, in fact, to the later ones).” (Bruce)

Paul was an example of how to live a Christian life, like we all should be. He knew the dangers ahead, but he had no fear.

The bond Paul had with these Ephesian leaders was immense. He was in Ephesus for two years, and the ministry was so effective that Acts 19:10 says, all who dwelt in Asia heard the word of the Lord Jesus, both Jews and Greeks.

It was hard for the elders to believe it. Maybe at first they thought he was joking. But they quickly understood that he wasn’t and they understood why he asked them to walk 36 miles to meet with him.

Paul’s conscious was clear because he held nothing back about God and Jesus.

TRUTH: Many preachers today simply use a Bible text as a launching pad, and then go on to say what they want – what the people want to hear. Others throw in Bible quotations to illustrate their points, or to illustrate their stories. Yet the real calling of a preacher is to simply let the Bible speak for itself and let it declare its own power. How many of you know exactly this point?

Paul offers words of encouragement and advice, to look after the flock (others), to serve them and feed them (teach them about Jesus), and to watch out for false teachers.

Paul ends by telling them to be more concerned about giving to their flock than receiving.

Jesus taught many things unrecorded in the gospels; John said as much in John 21:25. But we can trust that God has preserved all that is necessary of the teaching of Jesus.

Fun Fact: My study bible says that the quote “It is more blessed to give than to receive” is the only quote from Jesus not found in the New Testament Gospels.  I found this fascinating, especially since it is such a popular saying, and we only have it written down because Timothy wrote it when Paul said it. Totally cool! 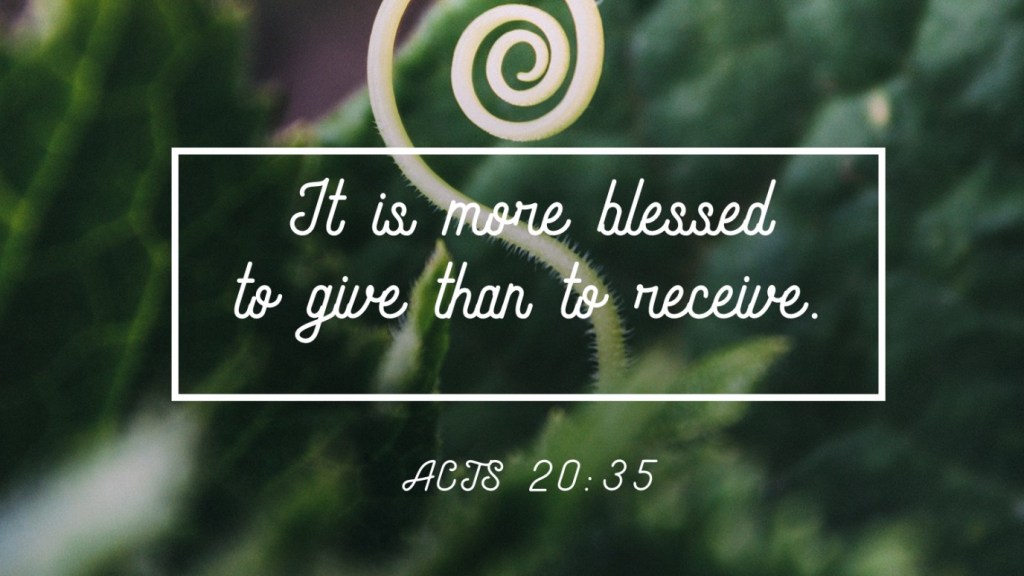 These short verses cover many miles and stops of Paul’s third missionary voyage to Jerusalem. Paul again is warned in Tyre not to go to Jerusalam, but he goes anyways.

The practice of walking with a traveler to the outskirts of the city was traditional; yet the practice of kneeling on the shore together for prayer was uniquely Christian.

It must have been wonderful for Paul and his companions to find Christians in virtually every city they stopped. This showed the expansion and the deepening of the Christian movement across the Roman Empire. Christians were everywhere, it seemed.

Acts 8:40 tells us that after Philip’s work in bringing the Ethiopian eunuch to faith, he preached through the costal region and ended up in Caesarea. Many years later he was still there.

It’s interesting that with these four daughters who had the gift of prophecy, none of them seemed to tell Paul anything about his upcoming time in Jerusalem. The Holy Spirit could have used them, but He chose to use someone else.

In the spirit of Old Testament prophets, Agabus acted out his message to Paul – that certain danger awaited him at Jerusalem.

Acts 21:12 shows that even Luke and Paul’s traveling companions tried to persuade Paul not to go to Jerusalem. Paul had received several prophetic words on this very topic. This is God’s custom with such a remarkable prophecy, that there should be a great deal of confirmation, as there was in Macedonia (Acts 20:22-23), in Tyre (Acts 21:4) and now in Caesarea.

The warnings from the Holy Spirit were intended to prepare Paul, not to stop him.  Whether Paul was right or wrong in going to Jerusalem, God would use it.