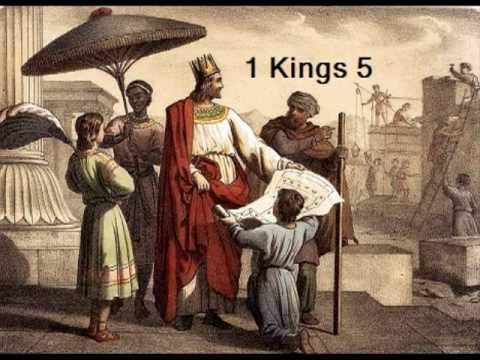 Solomon uses the cedars of Lebanon from the King of Tyre for God’s temple.

3) He planned to build God’s temple. Solomon knew the King of Tyre was his friend so he asked for wood for the temple as well as the men to fell the timber.

4) The King of Tyre has always been on friendly terms with David. David had already prepared a lot of the materials. God has given Solomon rest from wars, Satan, and natural disasters, so he’ll have the time and the resources to build the temple and pay the Sidonians for their skill. The envoy arrived at the perfect time.

5) Personal Question. My answer: God has given me this work on this forum to do, as well as my current position. I work hard at both to bring the most value. He’s inviting me to trust Him to His timing in this work.

I love how God does include the Gentiles in the building of the temple. It shows God’s foresight of His overall plan for the world.

“Hiram is an abbreviation of Ahiram which means ‘Brother of Ram,’ or ‘My brother is exalted,’ or ‘Brother of the lofty one’… Archaeologists have discovered a royal sarcophagus in Byblos of Tyre dated about 1200 BC inscribed with the king’s name, ‘Ahiram.’ Apparently it belonged to the man in this passage.” (Dilday)

David had already gathered many of the supplies needed to build the temple (2 Chronicles 22:4)

“To put enemies under the feet was the symbolic act marking conquest. In contemporary art, enemies were often depicted as a footstool (Psalm 110:1)

The word adversary here is literally Satan. The Latin Vulgate translates this, “nor a Satan.”

Of course, Solomon did not build a temple for a name but for a living God. This is a good example of avoiding direct mention of the name of God in Hebrew writing and speaking. They did this out of reverence to God.

“Solomon also used this phrase because he wanted to explain that he didn’t think the temple would be the house of God in the way pagans thought. Pagan temples might be intended for the actual residence of the god, but Solomon knew that the heaven of heavens could not contain God, much less this temple which he was about to build.” (Maclaren). 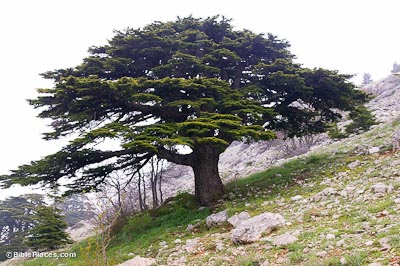 The cedar trees of Lebanon

The cedar trees of Lebanon were legendary for their excellent timber, showing how Solomon wanted to build the temple out of the best materials possible.

“The Sidonians were noted as timber craftsmen in the ancient world, a fact substantiated on the famous Palmero Stone. Its inscription from 2200 BC tells us about timber-carrying ships that sailed from Byblos to Egypt about four hundred years previously. The skill of the Sidonians was expressed in their ability to pick the most suitable trees, know the right time to cut them, fell them with care, and then properly treat the logs.” (Dilday)

Solomon was willing to build this great temple to God with Gentile wood and using Gentile labor. This was a temple to the God of Israel, but it was not only for Israel. Only Jews built the tabernacle, “But the temple is not built without the aid of the Gentile Tyrians. They, together with us, make up the Church of God.” (Trapp)