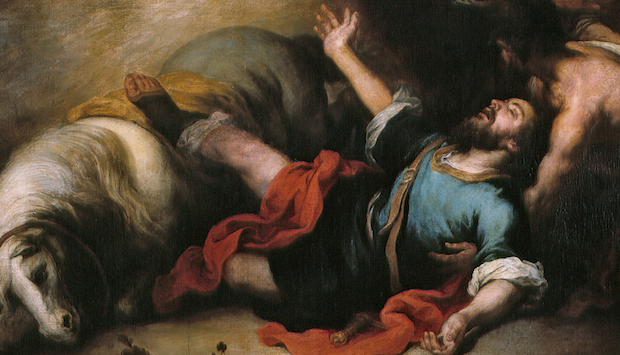 Saul was persecuting the Lord’s disciples and all others who belonged to the Way, trying to imprison them or kill them.  As Saul neared Damascus, a light from haven flashed around him and he heard a voice (Jesus), asking why does he persecute him?  Jesus tells Saul to go to the city and he will be told what to do.

The others with him did not see anyone.  They lead Saul to Damascus because Saul had been blinded by the light.  In Damascus, the Lord called a disciple named Ananias to go to Saul and lay hands on him so that Saul may see again.

Ananias tells the Lord that Saul is a bad man (as if God didn’t know) and he might be arrested if he goes.  The Lord explains his purpose for Saul to Ananias, saying Saul is His chosen instrument to carry his name before the Gentiles.

So Ananias complies, healing Saul and filling him with the Holy Spirit.  Saul was baptized and regained his strength.

9) Saul was persecuting the Lord’s disciples and all others who belonged to the Way. There are different types of persecution, including social persecution and emotional. You can be ostracized when you don’t conform.

10) Personal Question. My answer: It’s okay to question the Lord, but you still go and do it anyways.

11) Part personal Question. My answer: Saul was completely transformed and probably in shock since he didn’t eat or drink for 3 days, now about to become one the greatest disciples for Christ. Jesus has made all the difference in allowing me to do what I do, how I do it, and blessing me with a great life.

We last saw Saul in Acts 8:3, where it says that he made havoc of the church, entering every house, and dragging off men and women, committing them to prison. Here he continued and expanded this work to the city of Damascus (about 130 miles or 210 kilometers northeast of Jerusalem; a six-day journey altogether).

Saul did his persecuting work under the direct approval of the highest religious authorities. He asked and received letters from the high priest authorizing his mission.

The high priest was Caiaphas. In December 1990 an ossuary (something like a burial urn; essentially a bone box) was discovered in Jerusalem. The ossuary was inscribed with the name of this Caiaphas and positively dated to this period. Inside were discovered some of the remains of a 60-year-old man, whom many researchers believe was this same Caiaphas. If true, these are the first physical remains (such as bones or ashes) of a specific person mentioned in the New Testament.

Here, Christianity is referred to as the Way. This seems to be the earliest name for the Christian movement, and a fitting one – used five times in Acts.

God on the Road to Damascus

God does not normally confront sinners with a heavenly light and an audible voice from heaven. Yet Paul said that this light was brighter than the sun (Acts 26:13).

Saul, Saul: When God repeats a name twice, it is to display deep emotion, but not necessarily anger (as in the Martha, Martha of Luke 10:41 and the Jerusalem, Jerusalem of Matthew 23:37).

As the heavenly light overwhelmed him, Saul was confronted by the true nature of his crime: He persecuted God, not man.

In all probability, Saul heard Jesus teach in Jerusalem; and as a likely member of the Sanhedrin, Saul sat in judgment of Jesus in the trial before His crucifixion.

Jesus only told Saul what to do right at that moment.

God spoke to Ananias in a completely different way than He spoke to Saul. Saul had a bold, almost violent confrontation from God, but Ananias heard the voice of God sweetly in a vision, where God called and Ananias obediently responded. God speaks to us differently too, just as we need to hear Him.

God considered Saul His chosen vessel long before there appeared anything worthy in Saul to choose. God knew what He could make of Saul, even when Saul or Ananias didn’t know.

So often we underestimate ourselves when God doesn’t.