Upon David’s return to Ziklag after having been rejected for battle by Achish, he finds the Amalekites has raided the town, burned it, and captured everyone, including their wives, sons, and daughters. David’s men were angry and threatened to stone him. So David turned back to God.

David consulted God who told him to pursue the Amalekites to recover their kin. David helps an Egyptian slave who got left behind by the raiding party. This Egyptian slave leads them to the raiding Amalekites. David attacks and wins. He recovers everything and everyone that was taken from him and returns to Ziklag, sharing all the plunder even with his men who were too exhausted from the 3 day hike previously to help. David sends some of his plunder to the elders of Judah.

The wicked do not fear God. They do not know they sin. The plot evil, do wrong, and follow a sinful course. God’s love, faithfulness, righteousness, and justice is unfailing. Men find refuge in God’s wings. In God’s light we see His love. God overcomes all evildoers.

9) Upon David’s return to Ziklag after having been rejected for battle by Achish, he finds the Amalekites has raided the town, burned it, and captured everyone, including their wives, sons, and daughters. David’s men were angry and threatened to stone him. Everyone was distressed and wept until they had no more strength left to weep. So David turned back to God.

10) Part personal Question. My answer: David consults God. He tells his men when they are wrong when they are greedy and don’t want to share the spoils. He shares the spoils with the elders of Judah. I want to be more sharing of what I have as well.

11) Personal Question. My answer: God’s love is greater than any troubles I may face, and my job it so shine this love to others.

I love how God works here. He places doubt in the minds of Achich’s men, and David is saved from having to fight the Israelites. Despite David (and our’s) stupid decisions, God protects us and saves us from ourselves.

David and his men covered about twenty-five miles a day on the march south from Aphek to Ziklag, where they would have arrived tired, hungry and expecting all the comforts for a welcome home.

There is a touch of the Lord’s poetic justice in all this since David brought this exact calamity on other cities  (1 Samuel 27:8-11 during his time among the Philistines. David made his living as a bandit, robbing cities and whenever David attacked the land, he left neither man nor woman alive. The Amalekites were more merciful than David was.

God, who is great in mercy, does not discipline us as much as we deserve. Like a compassionate father, He tempers the stroke of His hand with kindness and love.

David has nothing left

What did David remember about God to give him strength?

David now sees why he was rejected by the Philistines: so he could return home and rescue his family. God is good!

God sent David support when he needed it most. Men from Manasseh showed up to aid him (1 Chronicles 12:19-21) and they kept coming.

FUN FACT: This was the first time David inquired of the Lord since he went to live with the Philistines. 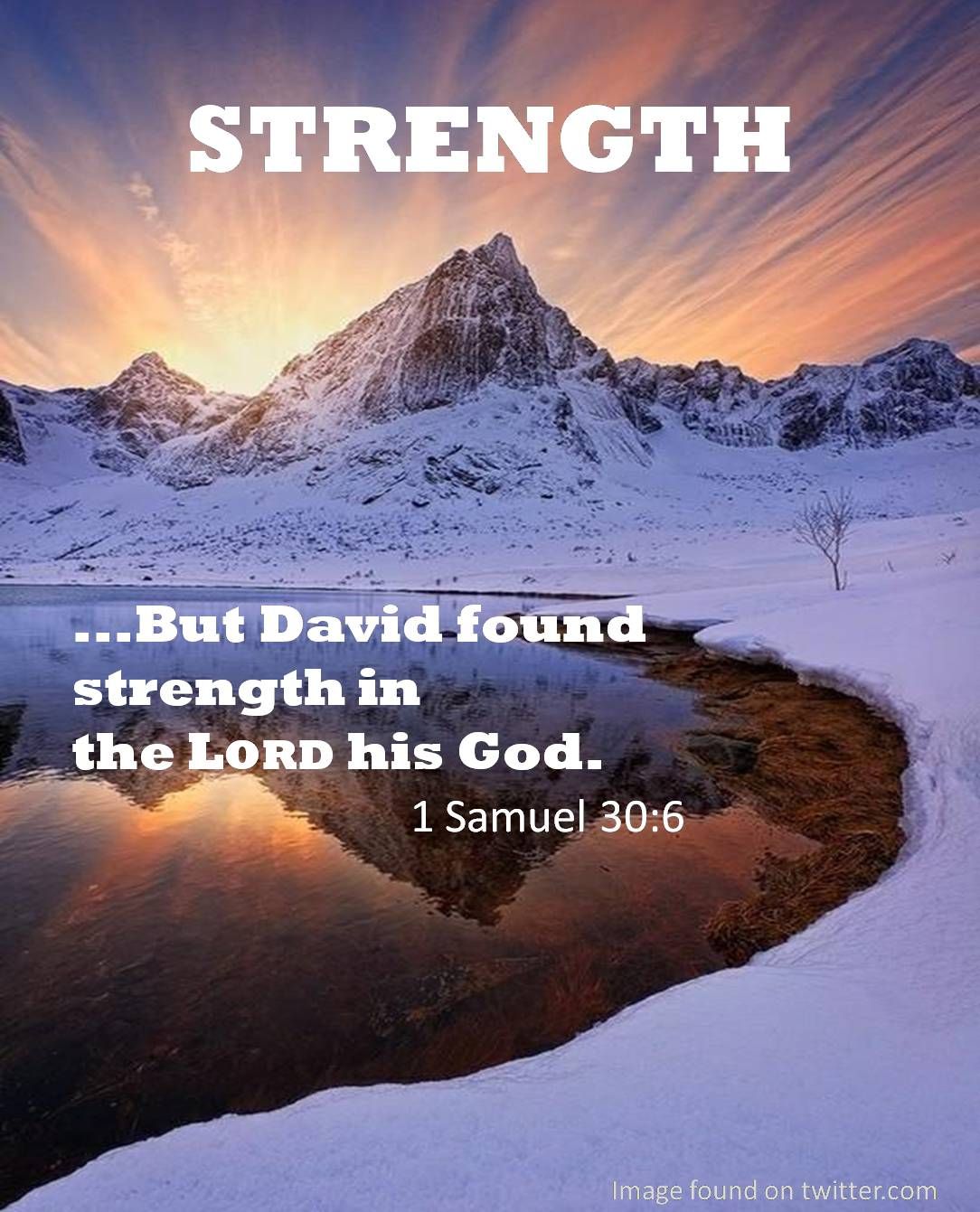 David sought God with the help of the priest, almost certainly using the Urim and Thummim that were part of the priest’s ephod. An ephod was a special apron that priests would wear to cover their clothing to keep the sacrificial blood off their clothes.

God gives us something to do, He also gives us a promise in the doing.

One-third of David’s army stays behind, too weak to continue. When God means to bless us, he often takes away a part of the little strength we thought we had.

Having shown unexpected kindness to an Egyptian, David is rewarded. He attacks the Amalekites when they were hung over from the party the night before as they thought the Israelites were far to the north.

God fulfills His promise through David’s action, not idleness.

Why was David allowed to keep the spoils of the Amalekites when Saul was commanded to not keep any spoil from that nation (1 Samuel 15:1-3) and was judged by God for not obeying that command (1 Samuel 15:13-23)?

David declared an important principle: the supply lines are just as vital as the soldiers and God will reward both “soldiers” and “supporters” properly.

Many people serve the Lord in invisible, behind-the-scenes ways, often supporting a much more visible aspect of the Lord’s work. God will support the hidden servant with the same reward as prominent servant.

Why David send spoils to the elders of Judah?

When Jesus triumphed on the cross He won the greatest battle and He had “spoil to share.” He shared the spoil with His people, as it says in Ephesians 4:7-8: But to each one of us grace was given according to the measure of Christ’s gift. Therefore He says: “When He ascended on high, He led captivity captive, and gave gifts to men.”

How is David a picture of Jesus Christ in 1 Samuel 30?

An oracle of transgression could mean David were divinely taught by the sins of others or it’s the voice within a sinner.

It is likely that Paul had this Psalm in mind as he composed the opening chapters of his great letter since he quotes verse 1 in Romans 3:18.

The wicked thinks of himself much more highly than he should both in regard to his sins (his iniquity) and his prejudices (hates). Flattery can be us thinking we are more than we actually are; it doesn’t have to come from others.

How does one flatter himself with regards to sin?

“The phrase ‘on his bed’ is parallel with ‘on the way’. The ungodly considers evil both in his lying down and in his walking.” (VanGemeren)

The translation of mercy here is inconsistent for the same Hebrew word hesed is translated as loving kindness is both Psalm 36:7 and 36:10. This wonderful word speaks of God’s love and mercy, but especially to His covenant people.

David can only describe these attributes of God with the biggest things he can think of – the heavens, the clouds that fill the sky, the great mountains, and the great deep of the sea.

“The word precious establishes the change from the immense to the intimate and personal.” (Kidner)

Loving kindness in verse 5 is too great to grasp and in verse 7 is too good to let slip. (Kidner)

What does shadow of Your wings mean?

Bible commentators see the shadow of Your wings 2 ways:

I’m inclined to think both.

The word fullness here is literally fatness. “The fattest is esteemed the fairest and the most excellent food; therefore the saint was enjoined to offer the fat in sacrifice under the law. As God expects the best from us, so he gives the best to us.” (Swinnock, cited in Spurgeon)

The fullness (abundance) of your house is will one of our great joys in heaven when we come to our Father’s house. With unmeasured satisfaction we will have the right to roam heaven and say, “Is this ours? And is this ours?” and say it unto eternity.

River of delight/pleasures: “Possibly a reference to Eden may be intended in the selection of the word for ‘pleasures,’ which is a cognate with that name.” (Maclaren)

What does “in your light we see light” mean?

We see light twice: light discovering and light being discovered and enjoyed.

Light is invisible by itself. Everything is invisible until light strikes it. So it is with God: we can’t see Him, but “in his light” (under his loving influence), we see and understand His love in all that surrounds us. God’s overwhelming generosity stands in complete contrast to the self-important plotting of wicked humans.

John wrote in the opening words of his Gospel: He was the true Light which gives light to every man (John 1:9). “It is hard to doubt that John was thinking of Psalm 36:9 as he composed the prelude.” (Boice)

“The Hebrew is, draw forth, or draw out thy lovingkindness: a metaphor either taken from vessels of wine, which being set abroach once, yield not only one cup, but many cups; so when God setteth abroach the wine of his mercy, he will not fill your cup once, but twice and seven times” (Greenhill, cited in Spurgeon).

Unlike the righteous who may fall seven times yet rise up again (Proverbs 24:16), the workers of iniquity remain in the dust as God protects His servants.

‘They are struck down,’ (thrown down) is the same word as in the picture of the pursuing angel of the Lord in Psalm 35.” (Maclaren)

THERE: Some scholars think it refers to the pride mentioned in the previous verse, others to the place where the workers of iniquity practiced their sin.