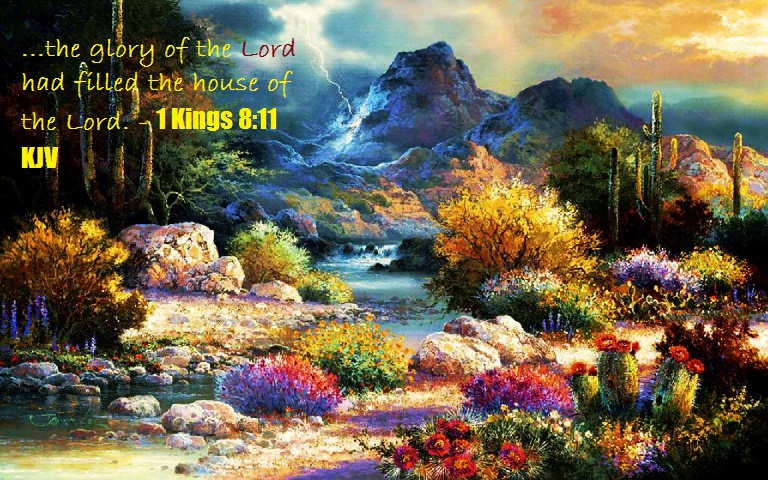 The ark of the covenant was brought up to the temple from Zion, the City of David. The priests brought up the ark when the elders had gathered along with all the sacred furnishings. Sacrifices of many sheep and cattle were made. The ark was taken to the Most Holy Place and placed below the cherubim wings. The ark only had the 2 stone tablets that Moses had placed in there at Horeb. God filled the temple with His glory.

6) Part personal Question: The ark of the covenant signified God’s covenant with His people and where He dwelled. It was above the cover between the two cherubim that God will meet with the Israelites and give them His commands.  It was transported by priests how God ordered it to be carried and it is placed under the wings of the cherubim, as if in protection, like God does with us today. And it is placed where God wanted to meet with His people.

I love the part where God finally has a proper home amongst the people of Israel, and He comes to be with them. I’m also grateful I live on this side of heaven and I can meet God and Jesus anywhere personally since both are in me.

The day the ark of the covenant was brought to the temple was a spectacular event. Only when the ark arrived could the temple begin to operate. Although the temple had been finished sooner (1 Kings 6:38), Solomon chose to wait to dedicate the temple, which was during the feast of tabernacles and during a Jublilee year.

Solomon was careful to obey what God commanded about transporting the ark of the covenant, allowing only the  priests to carry it. He would not repeat the error of his father David in 2 Samuel 6:1-8.

The holy furnishings included the ark, the lampstand, the table of showbread, and the altar of incense from the tabernacle.

“It is generally agreed that there were now two tabernacles, one at Gibeon, and the other in the City of David, which one David had constructed as a temporary residence for the ark.” (Clarke)

At an earlier point in Israel’s history, there were three items in the ark of the covenant. There had been the golden pot that had the manna (Exodus 16:33), Aaron’s rod that budded (Numbers 17:6-11), and the tablets of the covenant (Exodus 25:16). We don’t know what happened to the golden pot of manna and Aaron’s rod, but they were not in the ark when Solomon set it in the Most Holy Place.

The reminder of the deliverance from Egypt is significant, because there was a sense in which this – some 500 years after the Exodus – was the culmination of the deliverance from Egypt. Out of Egypt and into the wilderness Israel (out of necessity) lived in tents – and the dwelling of God was a tent. Now since Solomon built the temple, the structure representing the dwelling of God among Israel was a building, a place of permanence and security.

God dwells in His temple

This was the cloud of glory, seen often in the Old and New Testaments, sometimes called the cloud of Shekinah glory. It is hard to define the glory of God; we could call it the radiant outshining of His character and presence manifested in a cloud.

“There is a parallel to this event in Acts 2:1-4 in which God marks the inception of the church as the temple of the Holy Spirit by making his presence known through the sound of a mighty rushing wind and by filling those present with the Holy Spirit.” (Patterson and Austel)

Why could the priests not continue when the glory of God showed up in the temple?

The intense sense of the presence of our holy God is not a “warm and fuzzy” feeling. Men like Peter (Luke 5:8), Isaiah (Isaiah 6:5), and John (Revelation 1:17) felt stricken in the presence of God. They simply could not be comfortable sensing the difference between their sinfulness and the holiness of God.

This glory of God remained at the temple until Israel utterly rejected God in the days of the divided monarchy. The prophet Ezekiel saw the glory depart the temple (Ezekiel 10:18)