Abigail got wind of David’s request and how good he had been to them, guarding the sheep. Abigail decides to give David food without telling Nabal. She rides out to greet them as David is still seething over Nabal’s denial of his food request and is preparing to slaughter Nabal’s men.

Abigail prostrates herself before David, begging him to put the blame on her instead because her husband is a fool. She reasons with him to not kill them because then he’d have innocent bloodshed on his hands. David blesses her, saying she has saved him from killing all of Nabal’s men. Nabal dies. David marries Abigail. He had married Ahinoam of Jezreel as well but Michal had been given to another man.

Don’t worry over evil people. Trust in God and He will give you the desires of your heart. Wait for the Lord. Refrain from evil. The Lord laughs at the wicked. The wicked will vanish and perish. Do good and the Lord will not forsake you. He will bless you.

6) Part Personal Question. My answer: Abigail is intelligent and beautiful. She is selfless, willing to take on Nabal’s punishment. She cares for her employees to save them. She is humble, brave, and courageous. She is sacrificial. I’d like to be more caring, humble, and more sacrificial as well.

7) Part Personal Question. My answer: God sent Abigail to prevent David from doing something he’d regret and from sinning. Every day God extends mercy to me as I fail and am flippant with others, impatient, and mean sometimes.

8 ) Part personal question. My answer: God blesses the good and condemns the evil in His time. I need to be more patient with God and allow Him to give me the desires of my heart.

Leave it to a woman to diffuse a male ego. Abigail, knowing something bad is going to happen, goes to David and makes peace. David realizes how wrong he was and then marries Abigail, probably recognizing her intelligence, courage, and selflessness.

Nabal’s servants read the handwriting on the wall. They knew that David would not take such an insult (theft, actually) lying down. For their own sake and for the sake of the household. they asked Abigail to do something, knowing Nabal would not (Proverbs 17:12).

The fact that Abigail was able to gather so much food so quickly shows how wealthy Nabal was. If this much food was on hand, it makes Nabal’s ungenerous reply to David all the worse.

In his angry, agitated state, something unexpected made David and his whole company come to an immediate stop: a great procession of gifts, and at the head of that procession, a beautiful woman bowing down before David. This had to make a startling impression on David.

What did Abigail do that saved her men?

What did Abigail do wrong in her interaction with David?

Though there is no explanation in the Bible, perhaps Abigail’s behavior was justified because this was a life-or-death situation. If Abigail didn’t do what she did, then Nabal and scores of innocent men would die. But the point of the passage is how submissive and respectful Abigail is towards David, not Nabal.

The beauty of Abigail’s speech

What do we learn from Abigail?

David knew God sent Abigail and was speaking through her. How many Abigails do we have in our lives?

Abigail reminded David of his destiny – to reign over Israel in righteousness and integrity. If David had slaughtered Nabal and his household, it would forever be a black mark against David among Israelites. They would forever wonder if they could really trust him. It might also seal his doom before Saul, because for the first time David would have given Saul a legitimate reason to hunt him down as a criminal.

Note Abigail also paid David what he was owed.

What do we learn from Nabal?

Jesus may have had Nabal in mind when He taught the Parable of the Rich Fool (Luke 12:15-21). That parable describes a man who dies with everything – and nothing.

No. David was not married to Michal because Saul had taken her away and given her to another man to spite David (David will get Michal back in 2 Samuel 3:13-16).

David never followed God’s will in his marriage life, causing him some of his greatest trials. Although God did not forbid multiple wives, it is not God’s ideal for men and women and His plan for oneness. David had many passions, one of them being women. He was never blessed by God because, in this respect, he was not a man after God’s own heart.

Verse 25 tells us that the author is David in his older years, giving wisdom in the pattern of a song. This Psalm is roughly acrostic in arrangement with the lines arranged with Hebrew sentences that begin with the successive letters of the Hebrew alphabet. In style this is a wisdom psalm, directed not to man but to God, teaching after the manner of the Book of Proverbs.

Why do the wicked prosper?

Many people “fret” or are jealous of the wicked who proper despite their evil. Asaph was bothered by this problem in Psalm 73. Here’s what Bible commentators have to say about the matter:

David gives the same answer Asaph came to in Psalm 73: any prosperity experienced by the workers of iniquity was only temporary.

“In the Middle East the lush spring vegetation may lose its beauty in a few days after a hot, dry desert wind (hamsin) has parched the land.” (VanGemeren)

We think of a wicked man eating a magnificent dinner while a godly man goes hungry. The wicked man eats anything and everything he wants, and his table is loaded as he enjoys his meal. Then we see the bigger picture: he eats his last meal on death row and in a moment will face terrible judgment.

How do we not worry about what evildoers are doing?

All evildoers shall be cut off, and the blessed shall inherit the world.

Jesus quoted verse 11 in the Sermon on the Mount, in the third beatitude (Matthew 5:5). “It is right to say that Psalm 37 is an exposition of the third beatitude, even though it was written a thousand years before Jesus began his public ministry. It unfolds the character of the meek or trusting person in the face of the apparent prosperity of the wicked.” (Boice)

Why do the wicked plot against the just?

The wicked gnash their teeth, which shows the depth of their anger and hatred.

“If God can laugh at the wicked, shouldn’t we be able at least to refrain from being agitated by them?” (Boice)

The wicked will be broken; the righteous will be held by God.

Adam Clarke noted that some ancient manuscripts render verse 20 differently. “If we follow the Hebrew, it intimates that they shall consume as the fat of lambs. That is, as the fat is wholly consumed in sacrifices by the fire on the altar, so shall they consume away in the fire of God’s wrath.”

The wicked take; the righteous give.

The promise of earth-inheritance is repeated a three times.

How are the righteous rewarded?

As we seek the Lord and delight in Him, we find our lives are the perfect will of God (Romans 12:1-2).

“Geber is the original word for good, and it properly signifies a strong man, a conqueror or hero; and it appears to be used here to show that even the most powerful must be supported by the Lord.

God provides for His people

This was David’s testimony after many years. He saw God’s faithfulness to His people and wanted a younger generation to also trust in Him, learning from David’s wisdom.

David knew that among his ancestors were some who left Israel, fearful in a time of famine (Ruth 1). When they returned after several disastrous years in Moab, they found the people of Bethlehem in Israel provided for. God knew how to take care of those who trusted in Him in times of famine, and has done so since then.

One way that God provides for the righteous and their descendants is through the ethic of hard work that belongs to the redeemed, who know that all things should be done heartily, as unto the LORD – including working for a living. 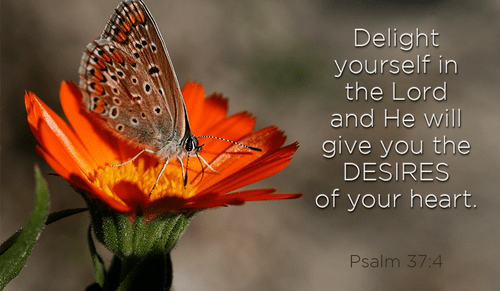 Do Godly men and women have to beg?

This Psalm is a wisdom psalm very much like Proverbs. In the Bible’s wisdom literature often times general principles are presented in the absolute.

We also note that David simply wrote of his experience. That being said, God provides no matter what and one must ask if you are begging, are your exercising every option available to you.

God’s judgments descend to posterity, not just His mercies.

What character traits do the righteous possess?