The Philistines were an immigrant people from the military aristocracy of the island of Crete (Amos 9:7). Small numbers of Philistines were in the land at the time of Abraham, but they only came in force soon after Israel came to Canaan from Egypt.

The Philistines’ period of greatest importance was from 1200-1000 BC when they were the principal enemies of Israel. They were organized into five city-states: Ashdod, Gaza, Ashkelon, Gath, and Ekron (Joshua 13:3; 1 Samuel 6:17). They were repulsed by the Egyptians in 1191, which forced their invasion of Canaan. Their cities were ruled by 5 lords or rulers (Joshua 13:3; Judges 16:5), one for each city.

The Philistines were a sea-faring people and traded with distant lands. Therefore, they were among the first in acquire newer and better military technology such as from the Greeks. Thus, the Philistines became a powerful enemy of the people of Israel.

During David’s time as a vassal of the Philistines, it is possible he learned the technique of iron-making. Probably David remained a Philistine vassal during the 7 1/2 years he reigned at Hebron (2 Samuel 1:1-4). When at the end of this time, he asserted his independence and united all of Israel under his rule, he defeated them in 2 battles (2 Samuel 5:17-25). David repeatedly bested them, ending their dominion over the Promised Land. 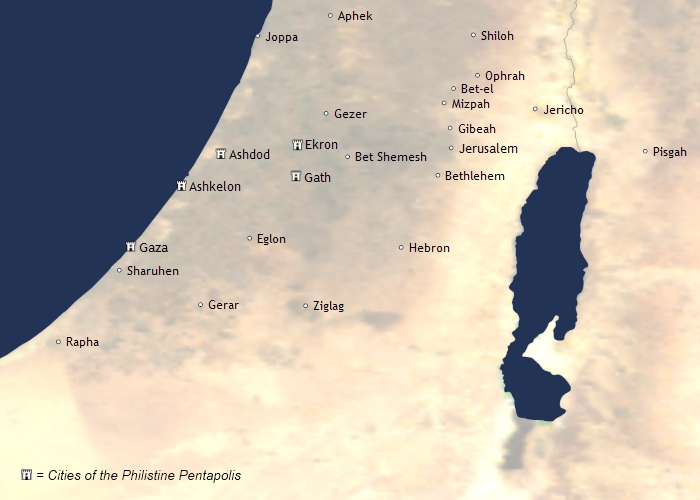 Summary of passage: Isaiah 19:  Isaiah prophesizes against Egypt, saying the idols and hearts of the Egyptians tremble before Him and the Lord will bring down Egypt through various means: Egyptian against Egyptian, droughts, plagues, fruitless harvests, no fish to eat, and inept leadership.  In that day the Egyptians will be brought low and be afraid from their oppressors but when they cry out to God, He will heal them and rescue them.  The Lord will build a highway from Egypt to Assyria and the Lord Almighty will bless them.

Isaiah 20: Isaiah prophesizes against Egypt and Cush, revealing that just as Isaiah has stripped and went barefoot for three years as a sign, the Assyrians will bring the same fate upon Egypt and Cush and if Judah aligns itself with Egypt and Cush, Judah will be ashamed and afraid.

9a) God will stir up Egyptian against Egyptian as well as neighboring cities and kingdoms.  He will use drought, failed harvests, and will change the language of the people.

b) God is nature which is powerful and unpredictable and ultimately sustains life on Earth (rain, water, air, sunlight).  One act (volcano, tsunami, earthquake) can wipe out whole peoples.  God uses Nature as constant reminders of His omnipotency and His glory (rainbows, snowfall on Christmas morning) and to remind us every day is a gift from Him.  We need to treasure it and choose Him before our time is up.

10a) Egyptians will be like women and shudder with fear at the Lord.  Judah will bring terror to the Egyptians.  Five cities in Egypt will speak the language of Canaan and swear allegiance to the Lord.  An altar and monument will be built to the Lord and serve as a sign.  When the hearts of the Egyptians turn, the Lord will acknowledge them and save them from their oppressors.  The Egyptians will offer sacrifices and grain offerings and make vows to the Lord and keep them.  The Lord will strike Egypt with a plague but He will heal them when they cry out to Him.  There will be a highway from Egypt to Assyria and they will worship together.  The Lord will bless both nations and join alongside Israel as the Lord’s blessing on Earth.

b) God can turn the hearts of any people and elevate them to the status of His chosen ones.  This gives me hope that at any moment nations can become good according to God’s will, even arch enemies (Assyria and Egypt) can one day walk together for the Lord’s work (like the US and Russia when the Cold War ended)

11) Isaiah’s representing what Egypt and Cush will be subjected to by the King of Assyria.  Since Israel wishes to ally with Egypt and Cush, they will be afraid and shamed after seeing their so-called protectors brought so low.  Extrapolating: Isaiah is showing Judah what could happen to them as well if they put their trust in Egypt and Cush and not in God.

Conclusions: Even the most atrocious, hard-hearted, evil people (Assyrians and Egyptians) can turn from their ways and be chosen by God for His purposes.  God forgives those who turn to Him no matter the crime (be it against His chosen people such as murder and destruction or against Him through idol worship).  Hope still exists for those peoples/nations/individuals who choose Him.  It’s never too late to find Him and God still has a purpose for you once you do.

End Note:  Ashdod is in Philistia and was conquered by Assyria in 711 BC.  This is where Isaiah’s warning against allying with Egypt and Cush stems from:  Judah was afraid they would be the next target of Assyrian invasion so they sought the protection of Assyria’s enemies, Egypt and Cush, instead of the protection of God.  Dates and info provided by: http://www.enduringword.com/commentaries/2320.htm