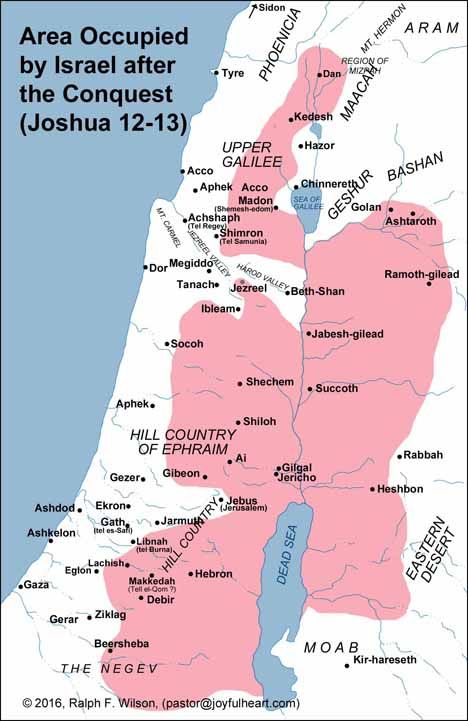 Joshua 12 lists the kings of the land the Israelites had defeated and whose territory they took over. Included is the list of tribes Moses conquered (the land given to the Reubenites, the Gadites, and the half-tribe of Manasseh) and the list Joshua conquered on the west side of the Jordan River.

12) These are real events, not a fairy tale or made up. This is a way for the Israelites to remember the great things God did for them, and to make it clear that the land belongs to Israel. God keeps His word and His promises to His people.

13) Personal Question. My answer: I love how Joshua is human. He succeeds. He fails. He obeys. He missteps. He disobeys. Yet in the end, he has a heart for God, which I hope to have as well.

Moses’ lands he conquered were on the East side of the Jordan River.

Although these lists mean little to us over 3000 years after the fact, this was important so all knew what land was theirs and the boundaries.

Summary of passage:  Stephen begins his defense by citing history.  He reminds the Sanhedrin that God appeared to Abraham while he was still in Mesopotamia and told him to go to Haran.  So he did.  Then God told him to go to Canaan and he did.  God promised him he and his descendants would possess that land even though at the time Abraham didn’t.  They would be enslaved for 400 years but afterward they would worship Him.

He gave Abraham the covenant of circumcision.  Isaac was born.  Isaac had Jacob who became the father of the twelve patriarchs.

He retells the story of Joseph, how these same patriarchs (Joseph’s brothers) sold him into slavery into Egypt.  But God was with him and Joseph became Pharaoh’s right-hand man.  Famine struck Canaan so Jacob and his whole family went to Egypt to survive and live with Joseph.

Their ancestors grew over this time but became oppressed by a different ruler of Egypt.  Around this time, Moses was born and he was brought up by Pharaoh’s daughter and educated in the Egyptian ways.

When Moses was 40 he visited his fellow Israelites and interceded when one was being mistreated by an Egyptian and killed the Egyptian.  However, the Israelites did not trust Moses so he fled to Midian.

Another 40 years passed when an angel appeared to Moses in the burning bush where God then spoke to him.  God told him he was sending him back to Egypt to rescue his people, the same people who had rejected Moses before.

He led them out of Egypt and wandered for 40 years.  During this time, the people still questioned Moses leadership and decided to make a golden calf to follow instead.  God got mad at this and told them they would be punished by exile in Babylon (much later on in history).

Moses had the tabernacle and it remained in the land until the time of David and Solomon built a dwelling place for it and the Lord.  But Stephen says God does not live in houses built by men.

Now Stephen attacks the Sanhedrin, accusing them of resisting the Holy Spirit and persecuting prophets and ultimately killing Jesus.

Of course, the Sanhedrin weren’t happy with this attack.  But Stephen looked up and saw the glory of God and Jesus at His right hand.  Appalled the Sanhedrin attacked Stephen and stoned him to death.  Stephen prayed for the Lord to forgive his attackers, while Saul looked on–something of profound significance coming up.

13a)  Stephen is being charged with blasphemous words against Moses, the law, customs, the temple, and God.  He is laying out the history of Abraham and Moses, careful to mention how the people had rejected Moses and to highlight how God was behind both of them.

b)  But the people rejected God’s chosen men time and time again, citing examples of the golden calf and angering God, including rejecting Moses even with the presence of the Tabernacle.

c)  Even today,  you (the Sanhedrin) resist the Holy Spirit, persecute and murder prophets (Jesus), and disobey God’s laws just like  your ancestors of the past.

14a)  Accused of blasphemy against God, Stephen used God’s words and God’s history to show how it was they who were not obeying God, not him.  Ever since Abraham, the people have resisted God’s chosen people (here I am assuming Stephen is counting himself as a chosen person of God) and continue to do so.  Basically, they are hypocrites.

b)  Stephen was calm and angelic.  The Sanhedrin were furious and gnashed their teeth at him.  Stephen used words as his weapon. The Sanhedrin used stone.

15)  Stephen looked up to Heaven and saw the glory of God and Jesus standing at the right hand of God.

16a)  Yes.  Death by stoning is a horrible way to go.  Jesus suffered in death and so did Stephen but Jesus was with him so I’m sure the pain was dulled by this knowledge.

Conclusions:  I can’t support my answer to 16a but it seems at least by the Notes from Lesson 1 and the little circle, BSF is implying suffering is a part of victory so since Jesus suffered, so did Stephen.  Plus, I can’t imagine being hit by one stone, let alone enough to kill you.

I love Stephen.  He’s one of my favorites in the Bible.  Here’s a guy who loves the Lord, does the Lord’s work, and is blessed by the Lord to do so and yet he’s picked on for doing so and ultimately killed because of it.  And he didn’t really do anything when compared to Jesus.  I would wager someone or some people just didn’t like him and wanted him gone.

Yet the Lord is with him to the very end.  Awesome!

I loved the synopsis of the history of Genesis and Exodus as well as we see how people resisted God’s word throughout the ages.  It seems like the people were just dumb back then (I mean who makes a golden calf when Moses is up talking to God face to face, right?) but you see the same kind of thing today.  People rejecting God’s word over and over again.  Ironic, isn’t it, how we still haven’t learned from the past.